Open a page of Forbes magazine and you will no doubt be met with yet another success story of a team of young entrepreneurs who have struck gold with their revolutionary innovation. In an increasingly globalised world, where technological advancement and knowledge transfer is growing at a faster rate than ever before, the climate for startups, due to enhanced access to markets and new business opportunities has never been better. However, the success rate of startups is often misrepresented and exaggerated in the media, with a vast 90% failing within their first year. Building a business from scratch can involve some risks and success cannot always be guaranteed, but if executed correctly, it has the potential to have an impact. 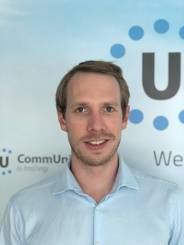 We spoke to Philipp Hollberg, co-founder and managing director of startup ‘CAALA’ and graduate of EIT InnoEnergy’s SELECT Master’s programme, to get an honest insight into the current startup environment, dispel any common misconceptions, and discuss his suggestions for aspiring entrepreneurs. CAALA (Computer Aided Architectural Life-cycle Assessment) enables architects and building planners to optimise a building’s design in a time-efficient and effortless manner, and thus increases the project’s economic value, while simultaneously preserving the environment. The software supplies users with the necessary tools to achieve energy and GHG-emission savings on a large scale.

According to Philipp, the EIT InnoEnergy SELECT Master’s programme, as well as his brother’s PhD in construction, was the inspiration for CAALA and empowered him with the necessary knowledge and motivation to become a tech entrepreneur. With a world-class education, as well as an abundance of highly desired skills sought after by employers, what is it that attracted Philipp to the startup scene, rather than taking the more common route of pursuing an office job? He attributes this decision to his education, which he considers to be his safety net. “I was able to take a risk with CAALA, because I knew that even if it failed, I had my education to fall back on, so there were always other paths and opportunities available for me to pursue.” He wanted to invest his time and energy into a cause he truly believed in and was passionate about, rather than settling for a nine-to-five job and a comfortable salary after graduation.

Philipp also credits the success of the company to his exceptional team, which includes his father and brother. While for some, running a business with family members may sound like a challenge, Philipp considers it to be a huge advantage for the company. Their aligned values and beliefs, as well as their complementary skills, create a dynamic and effective relationship, which is important in an environment that can often be stressful and unpredictable.

His family also contributes to maintaining Philipp’s healthy work-life balance, which is an aspect of running a business that many entrepreneurs struggle with. Even he admits that it is not always easy, and that it is important to be disciplined and realistic with yourself.

Being based in Munich means Philipp is never too far away from a weekend getaway to the mountains, where he enjoys engaging in various sports with friends and family. In Philipp’s eyes, interacting with the natural environment on a personal level is another crucial component of running a business like CAALA: “When working in the sustainability field, it is so important to be in touch with nature; to go outdoors and experience it for yourself, to be inspired by its beauty and to better understand the ultimate goal of your mission.”

However, it is unlikely to be successful without hurdles and setbacks along the way, Philipp emphasises. Patience is of the essence when it comes to startups. The processes involved take time, be it finding investors and receiving funding, or waiting for regulatory approval. While optimism is no doubt a positive characteristic to have, Philipp explains that when designing the initial product roadmap, many entrepreneurs fall into the trap of setting themselves unrealistic goals, which often prove too ambitious and require readjustment of the business plan. It is important not to dwell on the negative aspects in such scenarios, but to move forward with an informed decision after an in-depth analysis and reevaluation.

Lastly, a commonly overlooked but crucial stage in a startup’s life cycle is product sale. You may have a groundbreaking invention, Philipp explains, which you have spent years perfecting and is finally ready for commercialisation, but if consumer demand is lacking, its likelihood of success is minimal. Philipp, who is currently in the sales stage with CAALA, highlights its ‘trial and error’ nature, which often involves cold calling and requires great patience. He emphasises that this stage may be particularly lengthy if you are trying to get a completely new product onto the market, as it may take longer than usual to convince consumers that it is worth their investment. To bring revenue in the meantime, CAALA has also adapted to provide energy efficiency consulting services.

There is a huge hype surrounding startups in today’s modern society. The market is becoming increasingly saturated as hundreds of aspiring entrepreneurs go for gold and intensify competition in the startup sector. What advice does Philipp have for students and young professionals who want to make a positive contribution to a cause they are passionate about? In such a cutthroat environment, what makes you and your business stand out from the crowd?

Make sure you have a backup plan, Philipp urges. For him, this was his education, which provided him with a degree of security and a safety net in case things did not go according to plan. It put him in a position to “go a bit crazy” and take risks, which ultimately paid off and got him to where he is today.

A common misconception about breaking through the startup industry is that a revolutionary innovation is required to really set you apart as an entrepreneur and increase your business’s chance of success. Philipp explains that this is not in fact the reality. “I would advise against trying to only rely on being innovative. It may be much easier to sell a service or product that is already well-known on the market, than something that is completely novel. Finding the right balance is important. The key to selling your product is communicating how it benefits customers, and why it is better than its competitors.”

Most importantly, dream big. The CAALA software is still very much a niche today, but Philipp hopes that one day this technology will become a mainstream tool employed by planners and architects around the world. Ultimately, it all boils down to passion, perseverance and hard work. Be self-critical, challenge yourself and take risks.