The Sustainable Energy for All Forum - Lisbon

To most, the 2nd and 3rd of May in Lisbon was average for this time of year. The weather was typical for springtime, masters students went to class, professionals went to work, and many undertook their normal activities. These days were, however, filled with unique activities, unbeknownst to many outside of the space working to provide sustainable energy to the globe. Lisbon hosted the Sustainable Energy for All (SEforALL) Forum where over two days on the 2nd and 3rd of May, dignitaries, company executives, and representatives from global organizations including the International Energy Administration (IEA), International Renewable Energy Administration (IRENA), World Health Organization (WHO), World Bank Group, and United Nations (UN) converged to discuss, plan, and execute initiatives toward Sustainable Development Goal 7 ensuring energy access for all. A few InnoEnergy students and CommUnity members, including myself, had the privilege to attend. 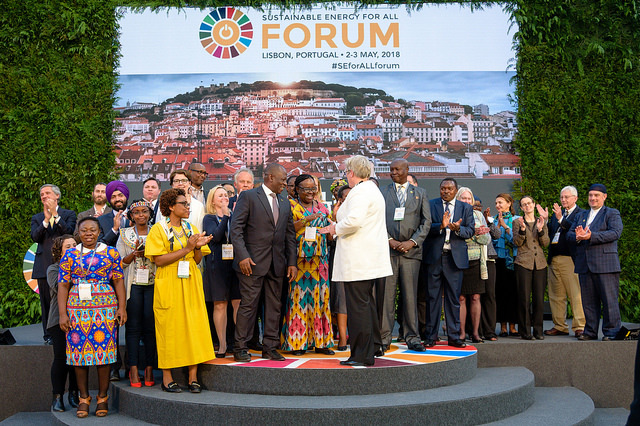 The Sustainable Development Goals (SDGs) were established by the UN as part of the 2030 Agenda for Sustainable Development. These 17 goals cover a range of issues from poverty, to energy access, and gender equality. SDG 7 is to “ensure access to affordable, reliable, sustainable, and modern energy for all.” Within that context, SEforALL is the nonprofit organization formed by the UN to execute SDG 7 by mobilizing and empowering several actors. As part of their work, they bring together these actors at a yearly Forum. At the opening presentation, the current progress since the initiation of the goals was presented. SDG 7 is divided into a few main sub-categories: Electrification, Clean Cooking, Renewable Energy, and Energy Efficiency

Laura Cozzi, Head of the division of Energy Demand Outlook of the IEA, presented the current status of Electrification with good news. She showed that for the first time in history, the absolute number of people lacking access to electricity has fallen. This is due to the fact that for the first time, the rate of growth of those gaining access to electricity was more than the rate of growth of the population itself. It currently sits at 87.3% of the population electrified as measured in 2016, an increase from 83.5% in 2010.

Maria Neira, Director of the Department of Public Health, Environmental and Social Determinants of Health of the WHO presented the current status of Clean Cooking, demonstrating that the percentage of the population with access to clean cooking grew by 1% between 2010 and 2016 (from 58% to 59% respectively). At the current rate, 73% of the world’s population would have access to clean cooking by 2030, leaving a huge gap to the 2030 SDG 7 target of 100%.

Elizabeth Press, Director of Planning and Programme Support of IRENA, presented the current status of Renewable Energy, showing that less than a 1% gain in the total final energy consumption from 2010 to 2016 (from 16.7% to 17.5% respectively) was achieved. This leaves a projected 21% of global final energy coming from renewable sources by 2030.

Vivien Foster, Global Lead for Energy Economics, Markets & Institutions in the Energy and Extractives Global Practice of the World Bank, presented the current status of Energy Efficiency, which is measured in energy needed to produce one unit of economic output or megajoules per gross domestic product measured at purchasing power parity (MJ/GDP PPP USD). Among the indicators in SDG 7, this is the only one which should fall, and as of 2015 it stood at 5.27 MJ/GDP PPP 2011$. According to Vivien’s presentation of the target, as of 2016 the compound annual growth rate (CAGR) of improvement in energy intensity (another measure of improvement of energy efficiency) was at 2.2%, an improvement from 1.3% in 2010. The projection is that the CAGR comes to 2.4% by 2030, which is 0.2% shy of the target of a CAGR of 2.6% by 2030. Further information and tracking on the indicators including how countries score in the various aspects of SDG7 can be found in the newly launched tracking tool of SDG7, also launched at the Forum.

It was apparent that there was still much to do to advance SDG 7. Rounding out the opening sessions, António Luís Guerra Nunes Mexia (CEO of EDP), Fernando Medina (Mayor of Lisbon), and Rachel Kyte (CEO and Special Representative of the UN Secretary General) gave speeches of the importance of this goal and how to achieve it. UN Secretary General António Guterres himself made an ‘appearance’ (sending in a pre-recorded video specifically for the event’s attendees), stating that “One billion people still lack electricity. Far more needs to be done to advance renewable and efficient energy in all sectors. From industries to transportation, from cities to rural areas… Let us invest in the future, not the past.”

The remainder of the event saw panel discussions about topics including the titles:

Several interactive panel sessions discussing transportation, job markets and development in the energy sector, and many more topics were covered.

Having attended many conferences across a wide spectrum of topics from construction, to utilities, and now sustainable development goals, this one was particularly interesting and educating from my point of view. It is not often that one can see the Minister of Energy of Uganda, the Executive Vice President of Mastercard, and the director of the UN Refugee Agency (UNHCR) have a panel discussion on “Energy in Humanitarian Settings”. In this talk, it was interesting to hear the Ugandan Minister mention the refugee crisis of his country where over a million refugees have sought asylum within the past couple years. To this comment, one of the CEOs of a Solar Company operating in East Africa said that the same number of people have also entered Germany in the same amount of time, demonstrating how there are the same humanitarian issues in the developed as well as the developing world. The conversation that ensued was quite profound, and something I was fortunate to be present for as the audience was filled with distinguished attendees themselves- founders of humanitarian organizations and dignitaries of governments alike.

As one CommUnity Volunteer put it:

“Volunteering at the SEforALL Forum was a unique experience. Both speakers and attendees were eager to share their stories, to network and to work together on all different aspects involved in ensuring access to affordable and modern energy for all. Seeing people placed at the center of the decision making process in sustainable development was probably the biggest achievement of the event. And just as important, the forum gave the chance to all its participants to interrogate themselves about what is not working in the energy sector, so that securing energy access for more than one billion people [who currently lack it] can be achieved faster. If we are to truly advance gender equality, social inclusion and women’s empowerment in the energy sector, this is the kind of inspiring events we need.” - Fabia Miorelli

Over the course of two days in the beginning of May, people with the power to execute initiatives toward a cleaner, more equal, more sustainable world converged upon Lisbon, and I was struck by many things during this short time. While there exists a gender imbalance in many sectors today, one would not immediately see this demonstrated in the sustainable energy sector by attending the event due to the near parity in the gender representation of the speakers--more than 40% of the speakers in the main sessions were female. This includes the four presenters of the current status of the aspects of SDG 7, discussed earlier, who are leaders in their respective global organizations.

The opportunity to attend such an event expanded my horizons, and my network. I believe the same can be said for the other CommUnity members who seized the opportunity and answered the call on the platform to volunteer at this event. I encourage all interested in such discussions to keep an eye out for potential opportunities like this shared throughout the CommUnity.