What is our role in the energy transition?

By: Beatriz Ildefonso in collaboration with The CommUnity Post and YES-Europe

By 2050, citizens are expected to go from mere energy consumers to active players in the energy system, able and willing to engage in the energy markets and policies. Over the next 30 years, the number of people producing their own energy is expected to increase dramatically. The first steps towards that reality are being taken now: while policy-makers keep pushing to put the citizen at the centre of the energy transition, digitalisation is increasingly seen as a bridge between the complex energy system and the regular consumer. On the societal side, as climate change becomes a common topic for people all around the globe, there is an increased awareness of our impact on the environment. In parallel, there were never better conditions for a youth-led behavioral revolution: we are many, we are informed, and we are connected. The future is ours.

Our role as conscious energy consumers

Are we aware of our impact as energy consumers? From the moment we turn on the heating system in our home to the transportation mode we use for our daily commute, we play a pivotal role in the way the energy system is shaped. The technologies available to us, to monitor and control our energy consumption, have multiplied in the last decades: smart-meters, programmable thermostats, smart appliances. While there is a tendency for our every day technologies to become more energy efficient, in parallel, the number of electric devices we rely on is also increasing (Figure 1). For this reason, our ability to consume energy wisely and preferably from sustainable energy sources will be a key factor in shifting the energy paradigm.

As revealed by the latest Eurobarometer, the European Commission has succeeded at informing society of the importance of renewable energy to achieve a decarbonized economy. In fact, investing in and developing clean energy technologies was considered a priority by 47% of the respondents, making it the most agreed upon priority. A total of 88% of the respondents agreed that it should be the European Union (EU)’s responsibility to “Support measures to increase the energy performance of buildings”. However, energy efficiency of buildings is mentioned less often as a major policy priority: a significantly lower share chose “Reduce overall energy consumption” (30%) or “Provide EU consumers with clear information to help them make better choices regarding energy providers, new appliances, energy savings, etc.” (26%) as a priority. Considering that energy efficiency – also referred to as “the first fuel” – is at the heart of the EU clean energy transition, these results can be interpreted as if the EU is not correctly passing on its own priorities. Similar opinions came from the question “What does EU energy policy mean to you?”, as shown below.

When asked “What does EU energy policy mean to you?”, the top 3 most common answers:

As mentioned in the European Commission’s “Clean Energy for All Europeans” (2019) report, boosting an energy conscious behavior in consumers will be a key factor in reducing energy use and emissions. But the question remains, how can this behavior be unlocked? Most of our consumption decisions are performed routinely and barely reflected upon. Therefore, the dissemination of knowledge and consumer awareness on the consequences of their choices may not be enough to change consumption habits. For once, there is still some lack of awareness regarding climate change and our role in it. A considerable share of people believe that these issues will be resolved through future technological progress, revealing a generalized feeling of unaccountability for individual choices and their actual impact on the environment.

Reducing residential energy consumption for space heating, for example, could have a significant impact on the energy transition, as this activity alone accounts for around 20% of the EU’s energy consumption. In some countries, like the Czech Republic, space heating is even the largest emitting end use. However, as revealed by a survey done across 11 European countries, citizens who want to reduce their heating-and-cooling energy spending face many challenges, like insufficient financial resources and lack of available loan and subsidy programs. Additionally, consumers are often locked into unsustainable lifestyles, such as citizens living in energy inefficient houses, unable to invest in significant improvements. Another example of this is a scenario where common heating costs of multi-apartment houses are split among many residents, and a misalignment in sustainable awareness among them lessens individual efforts. Additionally, some citizens reported struggling with still overly complicated energy bills.

Surveys done by CONSEED and partner organizations revealed that most households would only consider investing in an energy saving device if it would provide savings that allowed for a payback period of around 4 years (RTE). This is one of the main barriers to energy efficiency investments, referring also to an information challenge, considering that most of these investments require at least 10 years to break-even. On a more positive note, nearly 8 in 10 respondents of the aforementioned Eurobarometer said they have been influenced by the EU energy label, motivated by money savings, purchase of more sustainable appliances, or both.

“Utilities are incentivized to actively engage with consumers because it adds flexibility to the grid, reduces emissions and increases customer satisfaction. This isn't to say that it comes easy [...]. In reality, customers often don't think about a utility's offerings until they receive a monthly bill, or something goes wrong with service.” (Utility Dive)

When it comes to our energy consumption in mobility, availability of sustainable options is lagging behind across most countries surveyed: car-sharing (B2C and peer-to-peer) and bike-sharing are not yet broadly available, which explains the low utilization rates reported. The responses from 5 European countries, as shown in Figure 2, revealed that carsharing is used by less than 10% of the surveyed population. Peer-to-peer car-sharing is even less common. Additionally, levels of satisfaction with these modes of transport is low.

“Energy providers, the public and private sectors can do their part in the transition towards sustainable futures, but the individual energy consumer need to contribute too.” Eco2

Collective or social identities can be powerful drivers of pro-environmental purposes. This may be fostered with, for instance, face-to-face groups or broader social categories, as it incentivises local communities, neighborhoods, or private associations to engage in collaborative energy action. This can even be transposed to the professional life context: a factor that has been proved efficient in fostering sustainable energy choices is the existence of an eco-friendly behavior in the workplace. In a study, people subjected to pro-environmental and energy-sensitive working contexts and organizational culture more frequently demonstrated eco-sensitive feelings and awareness of environmental issues, e.g. guilt for not acting in an eco-friendly way, feelings of pride for acting in an eco-friendly way, collective pride, moral anger.

According to Alex Laskey TED Talk’s speech, more than moral suasion and financial incentives, social pressure is the most effective way to motivate people to consume less energy (based on survey responses). His company, OPower, provides its customers with personalized home energy reports and comparative data on how their neighbors, in similar-sized homes, are doing. By being able to compare their energy use with their peers and neighbors, people become more aware of their consumption trends, as there is a certain social pressure added. Since 2015, the NGO TIDE and WRI India have been leading a citizen engagement initiative, which included the same “neighborhood benchmarking” approach. It allowed consumers to find out how they were performing with respect to their neighbors, and in which category: «Champions», «Energy savers» or «Future champions». By 2019, it had been identified as one of the most efficient nudges in the program.

There are already some signs that consumers are undergoing a shift to a more active behaviour – a study by Accenture showed that customers have higher expectations than ever when it comes to communication with their energy provider/utility (Figure 3).

There are, however, some limitations for overall access to personal energy consumption data: as there has not yet been a complete smart-meter roll out in Europe, energy consumption patterns are traced using average values (final energy/electricity consumption per capita, energy consumption in households). Even when smart meters’ data starts to exist in larger volumes, it will most likely still be of restricted access because of data privacy issues.

Considering the results of the studies mentioned above, it would be reasonable to say that having access to information related to energy consumption (personal consumption data, best practices, etc.), while being able to internalize it in a familiar context – being that our neighborhood or workplace - has a significant potential for positive behavioral change (see Figure 4).

Our role as young energy consumers

The same study by Accenture revealed that millennials are eager to access new energy products and services, representing the highest share (in terms of age range) in the early-adopters category. The same applies to willingness to try out new technologies. Regarding residential energy consumption management systems, when asked to think about the next 5 years, 61% of young people (15-24 years old) were receptive to them, revealing a much more positive response than those older than 55 years old (36% receptive).

However, when asked about the EU energy label, young people (15-24 years) were the age group the least likely to both recognize it and be able to interpret it, with almost a quarter (23%) admitting to not knowing what the label stands for. This would explain why this age group was also the most likely to not be influenced by the label on their purchasing choices (30%).

“Involving young people with social media and bottom-up approaches seems to be the way forward Social media could play a key role: maybe it is time for the EU to use ‘green influencers’ to disseminate information on how to reduce our carbon footprint and make more sustainable choices?” (Marine Cornelis, NextEnergyConsumer)

With social media being an ever-growing powerful tool, there is a potential for youth to become sustainable trend-setters - influencing their networks and sending a message to companies and politicians that the younger generation is ready to take the lead in behavioural change. As mentioned in Jacobin, last year’s strikes for the climate earned an outstanding amount of interest and solidarity from all sorts of people, from scientists to educators and world leaders. Particularly impressive and noteworthy, is climate activist Greta Thunberg’s commitment to her speeches: for example, by avoiding air travel at all costs. The crossing of the Atlantic Ocean on a zero-emission sailboat was a key moment to make the world think: “If she can do this, then what can I do?” More than spreading awareness, or even worry, around the globe, these youth led movements show that those who want to change the world do not have to do it alone.

A final example of how informing youth on sustainable energy practices can lead to making better and smarter choices is the project below. 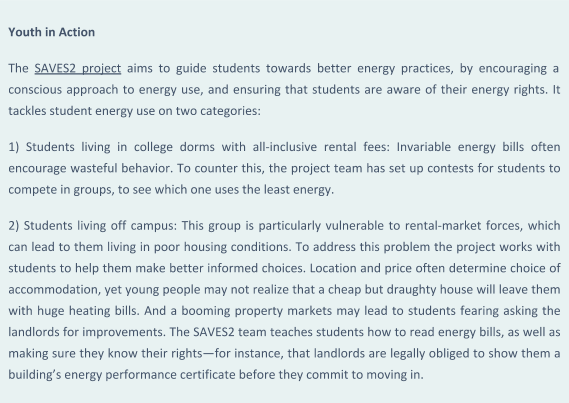