Stories of Inventors and their Inventions: Hedy Lamar and George Antheil

Stories of inventors and their inventions: Hedy Lamarr and George Antheil - Artists laying the Foundations of Digital Wireless Communication

We all read stories about the innovators of today and how their products or services make a difference. In this series of publications, we shed light on a side that remains often dark and unknown to the public: their patented inventions and what impact they have had on other innovators across society. We did the research and summarised our findings. 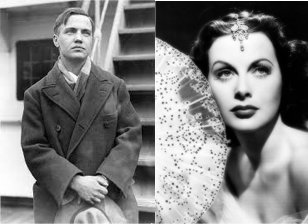 Hedy Lamarr (November 9, 1914 – January 19, 2000), born Hedwig Kiesler in Austria, is best known amongst movie aficionados for her Hollywood acting career in the 40s and 50s. Most memorable was her role of Delilah in Samson and Delilah, one of the box-office successes by Cecile B. DeMille.  She has a star on the Hollywood Walk of Fame.

Few people at the time of her career knew of Hedy’s other talent. Whilst never having received any formal training, she proved to be an inventor. Inventing was her way to escape from the boredom of Hollywood acting.

During World War II Lamarr was intrigued by the problem that radio-controlled torpedoes were easily jammed and set of course. She came up together with George Anteil with the idea of using an encrypted frequency-hopping signal to avoid the jamming.

George Antheil (July 8, 1900 – February 12, 1959), born to German immigrants, was an American avant-garde composer and pianist who also had a passion for inventing. 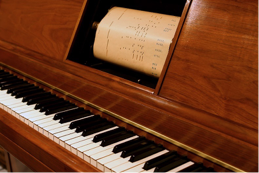 Using knowledge of torpedoes gained from Lamarr’s first husband – munitions manufacturer Friedrich Mandl – Antheil and Lamarr built on the idea of a piano roll that randomly changed the signal sent between the control center and torpedo at short bursts within a range of 88 frequencies on the spectrum (88 black and white keys are on a piano keyboard). The specific code for the sequence of frequencies would be held identically by the controlling ship and in the torpedo. This encrypted the signal, as it was impossible for the enemy to scan and jam all 88 frequencies because this would have required too much power. Antheil would control the frequency-hopping sequence using a player-piano mechanism, which he had earlier used to score his Ballet Mécanique.

George Antheil and Hedy Lamarr, under the name Kiesler Markey, obtained a granted patent US2,292,387 on 11 August 1942. The patent received little attention and only after expiration, the US Navy used it in the Cuba crisis. Oddly and most importantly the creation of Lamarr and Antheil proved to be the cornerstone of the “spread spectrum” technology and in the 90ies this emerged as the backbone of digital communication technology making digital wireless operations possible. Both received awards and they were both posthumously inducted in 2014 in the National Inventors Hall of Fame, recognizing holders of important US patents. 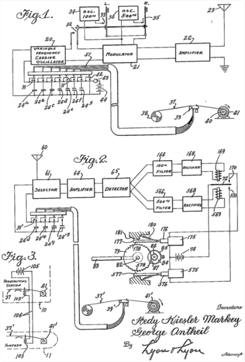