Stories of Inventors and their Inventions: Andre Geim and Kostya Novoselov 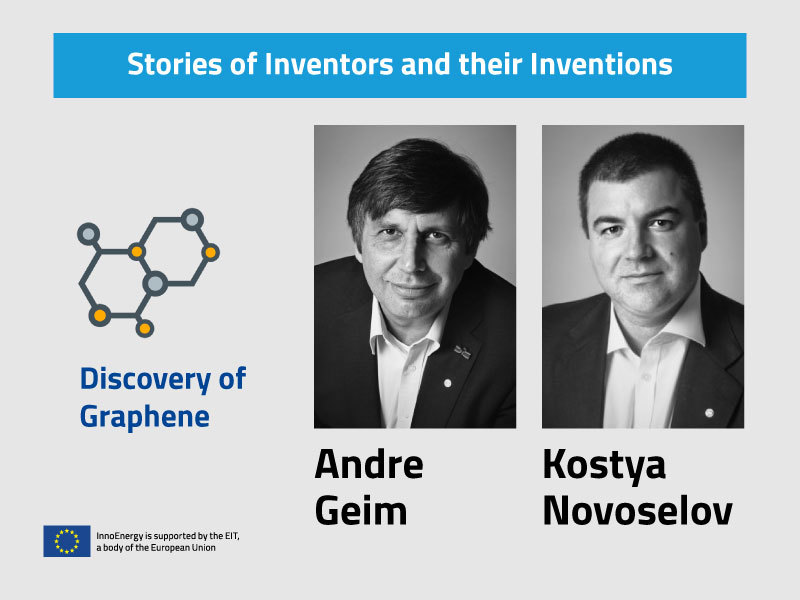 Considered the world’s thinnest and strongest material, graphene is a one-atom-thick sheet that has applications in fields such as energy generation, sensors and more. It can be used to enhance the strength of other materials and even make them lighter and thus is useful in the fields of aerospace and building materials too. Being a very good conductor, it also enables devices to store more energy and charge faster, thus making it a good material to be used in batteries.

Professor Sir Kostya Novoselov and his once PhD supervisor Professor Sir Andre Geim were working at the University of Manchester when they first isolated graphene, the material that is seemingly the perfect building block that benefits every industry, from graphite – a method known as ‘mechanical exfoliation’.

This Russian duo discovered, with the help of Scotch tape, that by repeatedly sticking and peeling back the Scotch tape from a block of graphite, they could get down to the thinnest of all possible layers, one atom thick.  It was this ground-breaking experiment that led them to win their joint Nobel prize in Physics in 2010.

Although their work was deemed ground-breaking, graphene patenting as such started way back in 1969 – a patent on the use of monolayer graphene. Thus, a broad patent on the subject was not possible since one of the basic requirements for a patent is that of novelty. However, they subsequently went on to file four patents related to this discovery namely on Functionalised graphene, Structures and methods relating to graphene, Transistor device and materials for making and Graphene-based sensors.

Graphene has also been considered as a feasible way to cut CO2 levels that are produced from burning fossil fuels, through carbon capture, a chemical technique called ‘post combustion’ i.e. a method that removes CO2 from emissions. The captured CO2can subsequently either be recycled or stored in gas or liquid form through a process called ‘sequestration’.

Carbon is the basic element of life, which means that graphene could be the building material for a new, green economy.