Energy saving in the digital era: how AI can be a killer resource

For a modern company, investing in energy saving should be a no-brainer. It is one of these rare cases in which business and environmental needs are perfectly aligned, and the large infusion of public investments we’ve recently witnessed can do nothing but increase the momentum.

However, apart from certain energy-intensive industries, most companies see energy saving as a “nice to have”, and not as a top priority. A McKinsey study finds some interesting drivers for this phenomenon. Some of the most crucials are:

Let’s dig deeper into these points and see how Artificial Intelligence can address them.

The “traditional” way to save energy has always been to invest in new appliances, new machines, or infrastructure. For instance, a building can become more efficient by investing on more performing insulation or a better HVAC plant, or a factory could install a CHP  (combined heat and power) solution or change its machinery for more modern and efficient one. The common thread is that all these initiatives require some degree of investment in physical components that are often quite expensive. There are some low hanging fruits of course that can bring large potential gains with small investments, but these kind of measures are often already in place, and the challenge is to make a step up.

Let’s see now what happens once we’re getting into the “digital” world and let AI give us a hand. Given that sensors are becoming always more a commodity, a big shift is enabled: we’re moving in the world of software. Availability of data is the first condition that enables the use of Artificial Intelligence. Using AI algorithms, we can feed them with the datapoints we collect from processes, machines or buildings and create a “digital twin”: a digital representation of a physical object. Once we have this digital representation, we can move to the optimization phase, obtaining double digits energy savings without changing any “hardware”, but simply changing the way we use what we already have. This is the example of the now famous experiment that Google has done in their datacenters, reaching up to 40% savings.

What’s interesting about this approach is the last point we mentioned: no heavy investments are needed: if we have all the sensors in place (which are becoming ubiquitous) the only thing we need is software. This is the same reason for which the International Energy Agency’s Digitalization and Energy 2017 report sees smart thermostats as the energy efficiency intervention with the highest impact with low barriers to digitalization, with a potential energy cut of 10%. 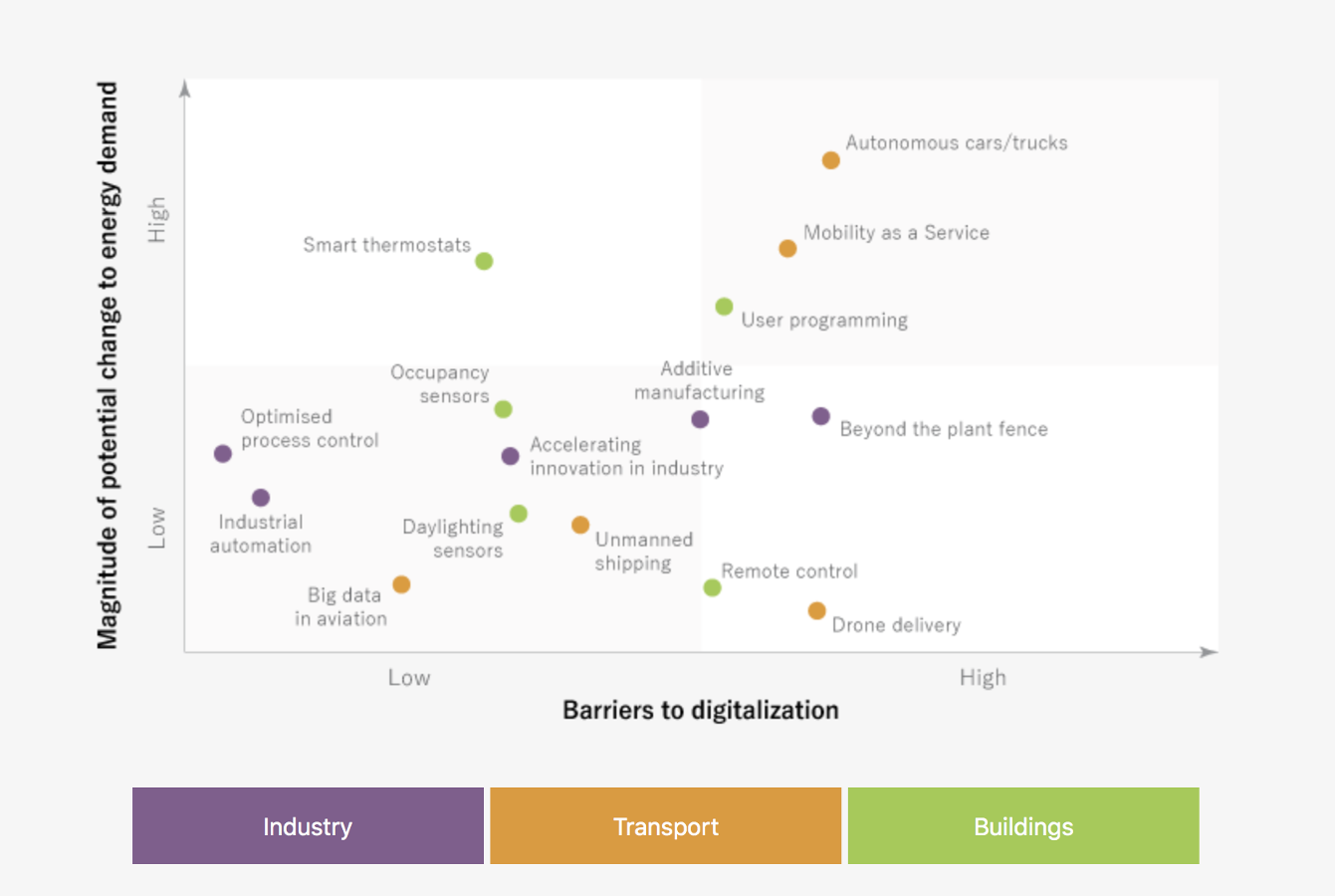 This key factor solves single-handedly the first two challenges: software optimization requires much smaller investments than most physical upgrades, and one of the outcomes of this process is indeed a better understanding, predictability and accountability of savings. The world of software enables also new business models, unlocking new opportunities for energy companies.

What is left is the third point: how we raise awareness on the potential of these technologies. Most people see the use of Artificial Intelligence as some sci-fi, far fetched tech that will bring us talking robots and other fantastical inventions. It’s important instead to bring more knowledge on the principles behind this technology, now that we’re living its golden age.

For this reason, we organized a one-hourwebinar, where we will demystify wrong assumptions around AI, and discuss how it can be integrated in the energy sector in a practical, hype-free way.

A Candid Chat with Alessandro Caviasca

Moving the world to renewable energy is hard: how AI can smooth the process