The Speaker Series are informal and open talks organised by the InnoEnergy CommUnity‌. These feature professionals from the energy sector who want to share their innovations and experiences with a large InnoEnergy community, made up of entrepreneurs, researchers, alumni and students, and encouraging a networking environment.

"Nuclear energy remains a controversial topic throughout the world"

With that in mind, Hanna Schlegel (MSc EMINE) and Leon Haupt (MSc SELECT) organised an incredible speaker series event on March 28th to shine some light on the topic and to inform the CommUnity of the recent developments in Nuclear Technology, particularly to those associated to LeadCold, a startup supported by InnoEnergy.

Congratulations to Hanna for selecting an unparalleled venue from which to listen to the presentations. While sitting inside a dismantled nuclear reactor hall, we heard presentations from Daniel Westlén, Nuclear Power Strategist from Vattenfall, and Professor Janne Wallenius, CEO of LeadCold.

Mr. Westlén started the evening by presenting the case for nuclear power, suggesting that it will be very difficult to meet our climate objectives without widespread acceptance and rapid action to install more nuclear capacity. He advocated a plan in which wind and photovoltaic production are aggressively augmented, reaching 850 TWh per year installed capacity and with an additional 680 TWh per year of Nuclear Power by 2029. Doing so gives a 66% chance of keeping temperatures within the 2 degree Celsius target put forth in the Paris agreement. This means the worldwide nuclear reactor fleet would need to grow by 65 reactors per year to achieve this capacity. Mr. Westlén also pointed out that the longer we debate the pros and cons of nuclear power, the bigger the problem becomes, which will call for a more drastic solution. For example, in 1997, as less CO2 had been emitted, a 1.7% reduction in emissions would have been sufficient. As little action was taken, now a 4.2% reduction in emissions is required to stay below the carbon budget associated to the 2 degrees Celsius target. He wrapped up his presentation by stating that “Climate change is our priority. We have to put all the fights between ourselves aside because none of the sources of (clean) electricity production can expand enough to solve this problem by itself. We need to use all the tools in the toolbox.” 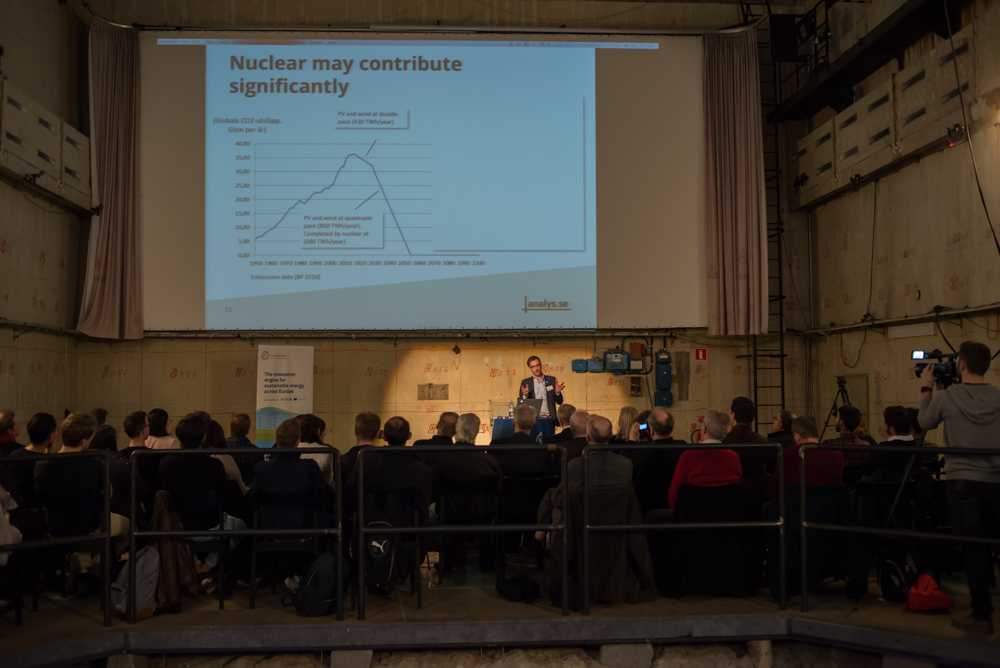 Primed to hear more about nuclear technology with open minds, Professor Wallenius presented his startup, LeadCold, which aims to bring his “SEALER” small-scale lead cooled nuclear reactors to remote areas, which are still heavily dependent on fossil fuels for energy production. He explained the long road he travelled, paved with societal and technological setbacks, to reach where he is today. One of the main technological challenges was due to the corrosive nature of lead. Several years ago in one of his laboratories, a new formula of non-corrosive steel with aluminum oxide and zirconium provided the solution. Once they had a feasible path forward with lead cooled reactors, Professor Wallenius identified a niche market in dealing with small-scale devices which could be sold for power generation in remote locations. After securing the 200-million-dollar investment required, a village in the Canadian arctic was selected to set up a demonstration 3 MWe reactor. This village suffers from such extreme temperatures that would require evacuation should the power be lost, so reliability of power supply is critical. At this moment, LeadCold is proceeding with testing and is eager to get to market. Professor Wallenius believes these units could be mass-produced in order to meet future energy demands, and they allow for private investment to fuel the market as costs are lower than with a typical large-scale nuclear power plant. 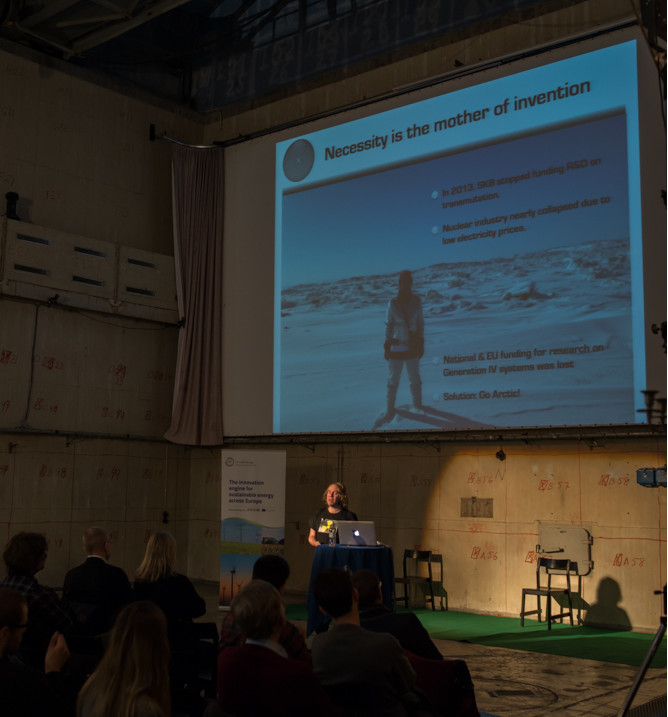 Once open to Q&A, the “elephant in the room” had to be addressed: nuclear waste. Some have accepted this as a necessary evil, while others remain less convinced: “The speakers provided a great overview of the energy situation and how it should be solved from their perspective. The audience was able to see the big potential of the technology, but there are also huge drawbacks and when asked about radioactive waste, the answers were vague. Hiding the waste for years is not a sustainable solution.” – Maria Vilardell, MSc Smart Cities

Nuclear power supporters and our panelists argue that the waste is not hidden, but carefully catalogued and stored. This provides the benefit of traceability that nuclear waste has over the waste from other forms of sustainable energy, such as PV panels. Additionally, they suggest that the newer generation of reactors, Generation IV, greatly diminish the concerns over waste by reducing the half-lives, and simply producing less waste, among other improvements. While the event did not put the controversy to rest, the balance between championing Nuclear Power as a whole and hearing about the struggles of a start-up in the sector created a truly engaging event!

Thank you to the speakers, organisers, assistants, and CommUnity members who came out for making this such a wonderful event!