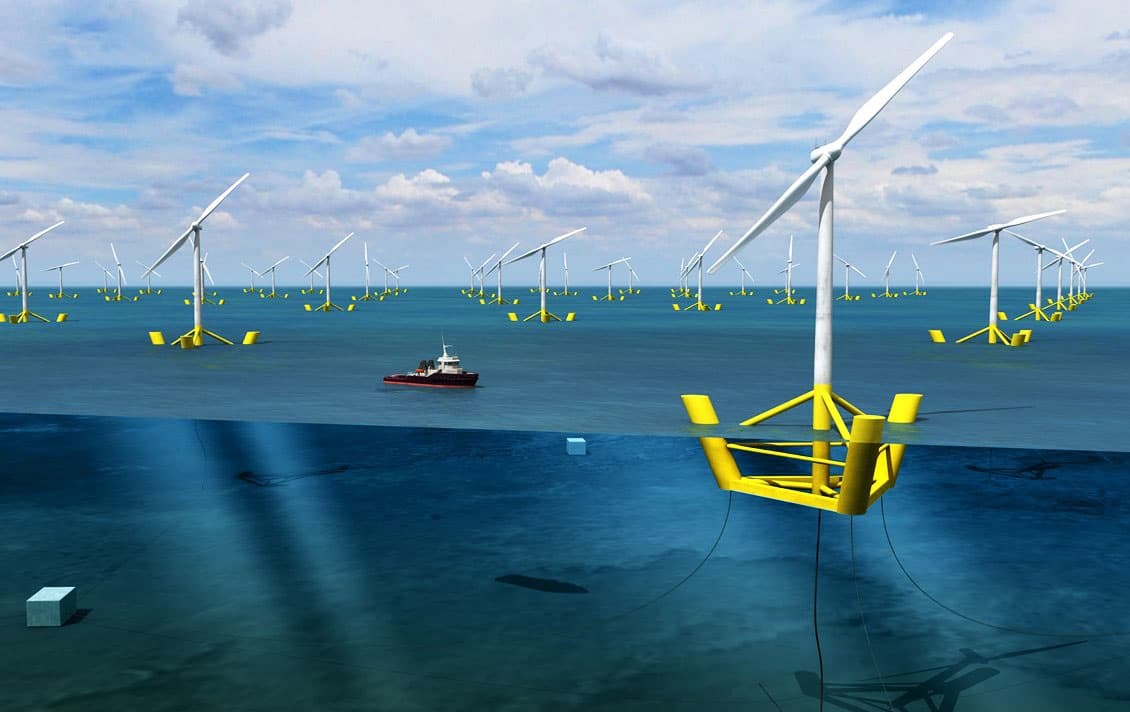 Nicola Sturgeon, First Minister of Scotland, opened the world’s first floating wind farm on October 18th, 2017. The 30 MW wind farm, operated by Statoil in partnership with Masdar Abu Dhabi Future Energy, is located 25 kilometres off the shore of Peterhead coast, Scotland, and will power approximately 20,000 households. The onshore management and maintenance base is located in Peterhead, while the operations centre is located in Great Yarmouth.Statoil and Masdar will also install a 1 MWh lithium battery storage solution patented as Batwind, for offshore wind energy, which has the potential to mitigate intermittency and optimise output.

“Our support for floating offshore wind is Sturgeon said [1].testament to this government’s commitment to the development of this technology and, coupled with Statoil’s Battery Storage Project, Batwind, puts us at the forefront of this global race and positions Scotland as a world centre for energy innovation,”

Mohamed Al Ramahi, CEO of Masdar, announced: “Hywind Scotland is showing that floating wind technology can be commercially viable wherever sea depths are too great for conventional fixed offshore wind power. This opens up a number of new geographies, and we are already looking at future opportunities with our partners, building on our existing international portfolio in onshore and offshore wind energy, and solar power” [1][5].

First Minister Sturgeon mentioned Scottish suppliers contributed to the Hywind project. However, this project involved well-known companies from the industry: Siemens, Navantia-Windar consortium, Aibel, Global Energy Group, Navacel or Balfour Beatty are a few among others. Their contributions were: [2]

Claire Mack, Chief Executive of Scottish Renewables, said: "Hywind's presence in Scottish waters is a reminder that, as the windiest country in Europe, and with some of the deepest waters and most promising offshore wind sites, Scotland is perfectly placed to capitalise on floating turbine technology” [4].

Sian Wilson of Crown Estate Scotland, stated: “It’s fantastic to see Hywind Scotland up and running. The project is a great success for the teams at Statoil and Masdar and for Scotland, where floating wind could really flourish due to our accessible deeper waters. We are committed to continuing our work to encourage floating offshore wind projects, which will in turn drive down costs, benefitting the whole sector—as well as the climate and consumers” [5].

How did they do it?

Many thanks must go to Drag Christensen & Knut Solberg, retired senior engineers, because they were the drivers of the Hywind project. According to the two:

“Some people thought we were crazy when we put a giant wind turbine on top of a floating spar structure and towed it out to sea. But it turned out to be the future, and the future is now. This year we made a giant leap forward as we installed and started producing electricity from the world’s first floating wind farm. The 30 MW Hywind Scotland pilot park will demonstrate the feasibility of future commercial floating wind farms that could be more than four times the size. This will further increase the global market potential for offshore wind energy, contributing to realising Statoil’s ambition of profitable growth in renewable energy and other low-carbon solutions,” said Drag Christensen & Knut Solberg [1].

Watch this video about the first floating wind farm with their testimony.

First, the Hywind floating wind concept was verified through eight years of operation of Statoil’s prototype installed off the island of Karmøy in Norway, the Hywind Demo project has been shown to function well in all wind and wave conditions. Given that Hywind Demo features a 2.3 MW turbine, almost everything for the project in Scotland had to be scaled up [6].

One of the most challenging aspects was lifting a fully assembled turbine and placing it on its floating foundation. The semi-submersible crane vessel Saipem 7000 lifted the pre-assembled turbines and transported them to the verticalised foundation in the fjord off Leirvik on Stord, Norway, where they were then mated. [1]

Second, the substructures for Hywind Scotland were transported in a horizontal position to the onshore assembly site at Stord on the west coast of Norway because onshore assembly reduces time and risk of offshore operations. In August, the giant Spar-type foundations were towed and installed at the site. They were then filled with close to 8,000 tonnes of seawater to make them stay upright. Finally, they were filled with around 5,500 tonnes of solid ballast while pumping out approximately 5,000 tonnes of seawater to maintain draft. More details are as follows [1][2][5][6]:

Bird conservation group RSPB Scotland opposed the project because it believes too many offshore turbines in the area have already been approved. It fears that thousands of seabirds may be killed by offshore wind farms [4].

By 2015, the Scottish government officially provided funding for Statoil to begin working on the five wind turbines. The installation of the turbines had a cost of 200 million British pounds [3].

“Statoil has said Irene Rummelhoff, executive vice president of Statoil’s New Energy Solutions [5]. What an ambitious goal!an ambition to reduce the costs of energy from the Hywind floating wind farm to €40-60 €/MWh (around $50-70) by 2030. Knowing that up to 80% of the offshore wind resources are in deep waters (+60 meters) where traditional bottom fixed installations are not suitable, floating offshore wind is expected to play a significant role in the growth of offshore wind going forward,”

She also said that Hywind can be used for water depths up to 800m, therefore opening up areas that have been inaccessible for offshore wind so far, adding that the lessons learned from the project will pave the way for new global market opportunities for floating offshore wind energy [1].

Why is this a disruptive technology?

From the point of view as an energy engineer, this technology represents a hope for the future of our planet. It is a very important and realistic step for the green energy transition and, if we manage to take advantage of our seas and oceans, we could produce the energy our lifestyles demand without using any carbon-based fuels. Realistically, it will happen in a long-term future but we have to consider that in terms of wind energy, worldwide wind capacity reached 486,661 MW by the end of 2016, and it can already generate around 5% of the world’s electricity demand [7].

What’s more, it is surprising that the first one innovating in the offshore wind sector is Statoil, a well-known oil and gas company. However, this fact proves that even fossil fuel companies believe that renewables are a worthwhile investment.