For the Sake of Days Yet to Come: Strategy

This second article in the series explores the importance of climate mitigation strategy and analyses some of the tools and ideas which could be used for its development. The main ideas discussed hereafter are the necessary conditions for a future decarbonised energy sector and cost baseline against an alternative energy system.

Efficient use of climate mitigation efforts is of significant importance given the risks (as discussed in the previous article in this series) of climate change and the little time and resources the world has to deal with these risks. However, figuring out the optimal use of these resources is not straightforward, especially considering their use in the future. For instance, how is it possible to “predict” impact and cost of technology which have yet to be developed?

Of course, nobody can predict the future. However, a number of tools such as future scenarios and models based on known system limitations, historical trends, analogous system development and experts’ input can be used. The results obtained from the previously mentioned tools can provide important insights which can be used to make more informed decisions in governments, companies and even in individual life. Decisions must be made on questions ranging from national power production portfolio composition to personal career choice. The alternative to such “fortune telling” is simply trial and error, which is a reasonable approach due to an inherent uncertainty. It is reasonable to allocate a portion of resources for a wide range of technologies and other climate mitigation activities for which success looks highly uncertain. However, allocating all resources in such a way seems to have little chance of producing the desired outcome.

Before going into what a strategy should be, let’s start by ruling out what a strategy is not. There is no single policy, practice or technology (PPT) which alone would fully decarbonise the entire energy sector. At least in my experience, I found a lot of people, including experts in their respective fields, falling in love with a specific “solution”. “If we introduce a global carbon tax we would ‘solve climate change’”; “If everyone would start consuming less <…>”; “If we build more renewables and use smart grid technologies…” are some common arguments I have heard. Such a strong conviction of importance of a single PPT could motivate one to work extra hard and keep pushing for greater mitigation impact of that PPT. However, a single PPT, no matter which it would be, will not achieve full decarbonisation alone. In addition to this, neglecting the contribution of other PPTs will likely limit the potential of the promoted one.

The proper climate mitigation strategy should lay out sectors where mitigation is going to be performed, its extent and tools to be used for realising mitigation at each sector. The figure on the right could be used as a starting point for developing such a strategy. According to this scheme, strategy development may start by assessing mitigation potential and then search available tools to realise it or vice versa. Climate mitigation potential can be assessed by dividing the economy into sectors and computing the amount of GHG emissions associated to these sectors. Various combinations of new policies, technologies and changes in behaviour (practices) allows them to capture different mitigation potential. After that mitigation potential and the available tools have been assessed, it should be possible to prioritise the most important sectors and tools for mitigation by their impact on mitigation and cost. Cost can be viewed more broadly and includes monetary, environmental, political, social and other types of costs. An example of such prioritisation for sectors from an economical point of view is carbon abatement curves*. 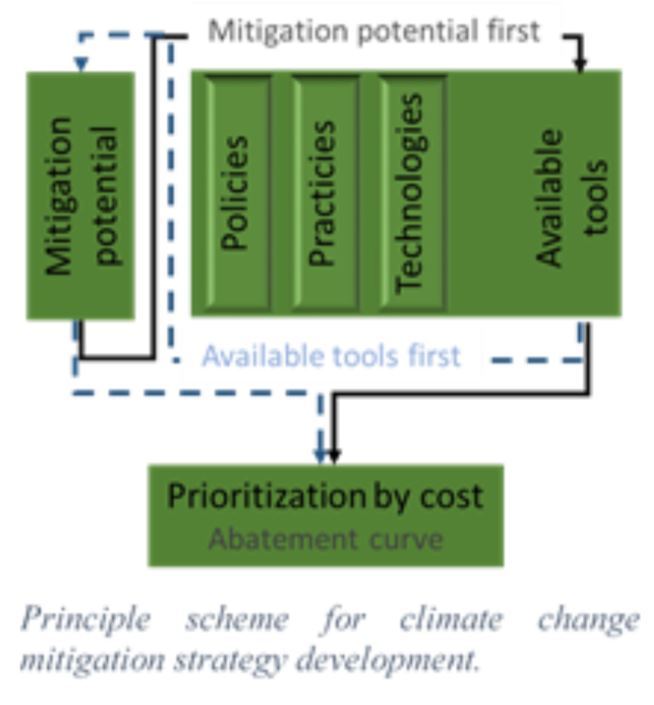 Decarbonising the energy sector is an enormous challenge which requires a large number of steps. It is impossible to know what kind of steps will give the best results in ten or twenty years from now. However, some conditions needed for a full decarbonisation in the long term can be identified and then used for PPTs value comparison.

There are many paths available to achieve decarbonisation targets, like Europe 2020's goal of 20% GHG emissions reduction. It can be done by increasing efficiency in buildings, industry and transportation; it can be done by incentivising less energy-intensive behaviours; it can be done by increasing the share of renewables. The number of possible paths is much greater when a discussion starts about how exactly efficiency is going to be improved, behaviour changed and renewable sources integrated. Some of these paths cannot necessarily be extended for longer term goals. They may become technically infeasible or simply too expensive when the whole energy sector has to be decarbonised by 80%-90%.

From a long-term perspective one has to consider that the almost complete decarbonisation of energy needs to not only be reached, but also maintained. This simply means that carbon from fossil fuels has to remain underground. It seems reasonable to formulate a condition for this to become a reality as follows:

Energy in which its obtainment and use does not emit carbon into atmosphere has to be cheaper than one which does.

This condition can be satisfied by increasing the cost of fossil fuels by setting direct or indirect costs of carbon through various policy tools or decreasing the cost of zero carbon energy sources. In order to achieve almost complete decarbonisation this condition has to be true in the largest number of countries and the largest number of sectors possible.

It is worth noting that even if some PPTs may not be suitable in the long run, they may still be very valuable in terms of “buying time”. PPTs which cannot be scaled can still lower emissions to some extent. Decreasing levels of emissions would mean more years until CO2 concentrations would reach the 450 ppm threshold. During these years, political processes and technological and social innovation can provide new PPTs for complete and sustained decarbonisation.

One may be more optimistic than others about the difficulty of making energy from alternative sources cheaper than from fossil fuels. Regardless of where you stand, the following points should not be forgotten.

Let’s start by looking at the argument that renewables, such as solar and wind, have already reached grid parity in some countries and are close to reaching it in others**. First, it is important to know if electricity price refers only to the market price for electricity generation or also includes tariffs*** for grid maintenance and financing other projects. The market price for electricity generation can be several times lower than the price that includes all tariffs. Often support schemes for renewables do not include these tariffs for electricity produced from renewable energy sources making it much cheaper. Second, the integration of inherently intermittent renewables in the grid requires enabling technologies and measures to address the challenge of intermittency, for which costs have to be accounted. In order to push fossil fuels out of the market without subsidies, the cost of electricity production from renewable sources and enabling technologies**** have to be lower than the cost of energy produced from fossil fuels.

If that would not be enough, the electricity sector is possibly the easiest one to decarbonise. Decarbonisation of buildings, transportation and industry may require additional inefficient energy conversion steps to chemical fuels.

At the end of the day, a competitive market will use the cheapest energy sources. Therefore, the changes of the cost of fossil fuels cannot be ignored as a significant challenge to the path of decarbonisation. Depleting the best fossil fuel resources forces further extraction of lower quality resources and thus increases costs*****. At the same time, fossil fuel technologies are also advancing and costs are decreasing. What is more, the development of fossil fuel technology is not limited to incremental improvements, but can experience game changing technological advances. An obvious example of this is shale gas revolution. The discovery of an economical way of extracting methane hydrate could be an even more disruptive development.

Several tools and concepts have been mentioned for climate mitigation strategy development. Many more are out there. Necessary conditions and alternative energy system viability cost baselines are meant to be the first two building blocks for creating a strategy which stands a fighting chance to keep us below 2°C.

Looking through a lens of these concepts may help to paint a picture and evaluate the contribution of different technologies and measures. It could also help to put different career paths into the climate mitigation context. In the next article I will share how I see my own personal contribution.

*Carbon abatement curves show the costs of CO2 reductions and the reduction potential of various measures. Some CO2 reduction measures can have negative value - they are net positive for a country or region without even considering climate externalities. Interested readers may find more information at: https://www.mckinsey.com/business-functions/sustainability-and-resource-productivity/our-insights/greenhouse-gas-abatement-cost-curves

**Grid parity is the state when the cost of electricity generation from alternative energy sources is less than or equal to the price of purchasing power from the electricity grid.

****A number of technologies and measures exist that enable the integration of a higher share of variable renewable energy sources while maintaining safe operation of the grid. These could include: geographical extension of the grid, demand response, use of less intermittent renewable source types, oversizing and curtailment of peak production, etc.

*****Interested readers may find much more detailed information on this topic in the 2013 International Energy Agency report “Resources and Reserves”.