Identifying key market trends can often reveal fascinating insights and present the opportunity to optimise potential and grow your business. However, it is not the ability to spot current trends that will ultimately lead to success, but the ability to project those of the future. The power of foresight is of paramount importance in the conception and realisation of a business idea. Forward thinking, coupled with ambition and the resolve to take action is usually what results in the most consequential, ground-breaking innovations.

Carlos Casanovas, CTO & Co-Founder of X1 Wind, during his extensive academic and professional careers specialising in wind energy, gained expertise that allowed him to spot a gap in the market and anticipate a future trend and start a pioneering business.

After an undergraduate degree in industrial engineering at the School of Industrial Engineering (ETSEIB) in Barcelona, Carlos took a job at Alstom Wind. Six years later, Carlos applied to MIT for a master degree, where he spent two years doing research under the supervision of Professor Paul Sclavounos, a distinguished name in the offshore wind community. His objective was to specialise more in offshore engineering. 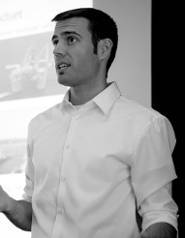 Upon his return to Barcelona, Carlos decided to look for opportunities abroad to get the first-hand experience in the offshore industry and he headed to Amsterdam, where he joined a project working on the first floating tidal platform in the Netherlands and the second in the world. It was here that he met Alex Raventos, his current business partner.

Following the project’s completion, Carlos returned home and started working for Gamesa, a leading manufacturer of wind turbines. During his time at Gamesa, his friend Alex contacted him with a proposition. While working in Amsterdam together, Carlos had shown Alex a design he had devised in his spare time while at MIT (the concept behind X1).

Alex suggested that they work on the concept in greater depth, work out its economic feasibility and enter it into InnoEnergy’s Clean Tech Camp competition, a programme designed to accelerate and boost start-ups in the sustainable energy field in Spain and Portugal.

X1 Wind went on to win second place in the Clean Tech Camp, and received recognition and endorsement from highly reputable organisations like Gas Natural Fenosa (who was backing the contest) and InnoEnergy.

Carlos and Alex made the pivotal decision to quit their day jobs and full-time into making the X1 Wind concept a reality. This was a difficult decision for Carlos, but one he is happy to have made. He was comfortable in his job at Gamesa, where he enjoyed a great deal of flexibility, but in the end, decided to take the risk and commit to pursuing his business idea.

In the first year, the pair used their own funds to develop the concept. After running some practical tests, which proved successful and verified the huge potential of the business, they were accepted into InnoEnergy’s Highway scheme, and consequently received funding for further R&D. After just a few years, what had begun as nothing more than a spontaneous design, was beginning to gain traction and develop into something substantial.

Carlos explains that oceans currently contain the largest energy resource on the planet, which remains untapped. This is due to today’s offshore wind turbines, which are rooted to the seabed, being restricted to waters less than 40 meters deep, meaning that a vast 80% of the world’s oceans are unable to be harnessed as a source of wind energy.

This rules out sites with the strongest winds and, often, access to big markets. The estimated potential of deepwater offshore wind only in Europe, the US and Japan are 7.000GW, which is 14 times the current installed onshore wind capacity.

Floating wind turbines could be game changers in this regard, by eliminating the depth constraint and easing turbine set-up. Their structure would allow them to operate in deeper waters, harnessing the vast untapped energy potential, thus majorly advancing global wind energy capacity as a source of power generation. 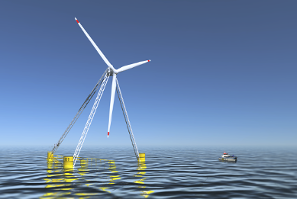 Carlos and Alex are ambitious about the future. If all goes to plan, they hope to develop their small turbine prototype by 2020, followed by the large one in 2022. They are now focusing their efforts on technology development with advanced simulation and tank testing campaigns while raising investment for the sea trials. In the longer term, Carlos would like to collaborate with a large company with the capacity and industrial muscle to oversee full-scale commercialisation, while X1 Wind would remain a technology developer focusing on the technical side of operations.

In terms of advice for future start-ups, Carlos urges any aspiring entrepreneurs to overcome any qualm they may have regarding their business idea, and just give it their best shot. He highlights that if in the worst-case scenario your idea is not successful, at least you can rest easy knowing you tried. There is nothing more regrettable, he says, than living your life thinking ‘what if?’, or worse even, watching someone else be successful with an idea that you had.

Between dropping costs, increasingly ambitious renewable energy targets, and major technological advancements, offshore wind technology is looking to be the next big player in the renewable energy sector, and X1 Wind looks to be leading the way among this new generation of innovators. When fully developed, the X1 Wind technology and other floating wind technologies will be a major step forward in diversifying the global energy mix and play an important role in cost-effectively decarbonising the energy sector.

Koh Jik ReCharge, a project that will boost the micro-grid system of a truly off-grid community in Thailand