The Sustainability Supplement is a series of research articles prepared by InnoEnergy Master’s School students throughout several European locations. The series provides opinions and commentary on various topics including energy resources, energy efficiency, sustainability, and other topics of interest. Any opinions expressed in these articles are those of the writer and do not necessarily reflect opinions of the  CommUnity by InnoEnergy or the CommUnity Post.

Cities are where the majority of European energy is consumed and where most European greenhouse gas (GHG) emissions originate [1]. In 2007, for the first time in human history, the number of global urban dwellers outnumbered those living in rural settings. By 2050, urbanisation will become one of the 21st century's most transformative trends putting cities right at the epicentre of a global shift from rural to urban areas, as the world's urban population is expected to nearly double. The latest UN estimates suggest that this trend is likely to lead to a total of 6.3 billion urban residents by 2050, approximately 70% of the predicted total global population [2]. Massive sustainability challenges in terms of housing, infrastructure, natural resources, services and health will occur as most social and cultural interactions, economic activities as well as environmental and humanitarian impacts will be increasingly concentrated in cities [3].

This global context is not unknown to Europe either.  Several leading and progressive cities and towns across the European continent have already taken innovative steps to enhance the deployment and use of renewable energy resources within their geographic boundaries. However, European cities need to make an effort to further implement new measures to meet the ever-increasing demands for energy services and adapt to the changing energy landscape.

The objective of this article is to present the role cities can play in the transformation of the European energy system, as well as possible efforts to integrate currently heterogeneous sectors into one coherent urban energy system, with a particular focus on the energy efficiency of transportation and buildings. The article charts pathways to greater deployment of renewables, explores best practices and provides an overview of opportunities to create synergies between sectors.

The World Energy Council's definition of energy sustainability is based on three core dimensions which make up the energy trilemma: energy security, energy equity and environmental sustainability [4]. This trilemma is usually used to rank countries according to their energy performance and provides a framework to benchmark progress. The power and value of the trilemma tool is its ability to test whether new policies or projects are helping or hindering moving towards a more sustainable and low carbon economy and what adjustments or changes are needed for such new initiatives. Balancing these three pillars constitutes a challenge that has to be faced by European cities too, as they seek to decrease their dependence on external energy sources through smarter use of local resources, better organisation of urban mobility and reducing their energy consumption for public lighting and residential buildings [5].

Sustainable cities and communities are a key pillar in the UN’s Sustainable Development Goals, which warns that sustainable development cannot be achieved without significantly transforming the way we build and manage our urban spaces. While cities cover a small part of the world, their economic and ecological footprints are much larger. Over 80% of the global Gross Domestic Product (GDP) is produced in cities, which as a result produce more than 70% of the world's GHG emissions and use 80% of the world's total energy [2]. Currently, although cities account for just over 50% of the world's population, they consume 82% of total annual natural gas use, 76% of nuclear, 76% of coal, 75% of hydro, 72% of the other renewables and 63% of oil [6]. The concept of 'cities for all' has also been stressed during the UN Habitat III Conference (World Cities Day), which emphasised the importance of social inclusion in cites to make urbanisation a driving force of global development [2].

Although European countries lead the 2016 Trilemma Index Performance, in order to improve the quality of life of their citizens and at the same time be less dependent on external energy resources, European cities still have to face the challenge of reducing GHG emissions and improving their overall energy efficiency [4]. To avoid the risks resulting from the energy transition, e.g. power cuts, securing energy resources and therefore contributing efficiently to their economic growth, European cities have to increasingly identify where energy is produced and look for local alternatives.

While the EU's gross energy consumption has been steadily falling in most member states for the past 7 years, it has not been significant enough to compensate for the 20% drop in internal energy production over the same period [1]. For example, if Europe as a whole performed as well as the municipality of Oslo when it comes to GHG emissions**, it would have already surpassed its overall carbon reduction targets [7].

**Oslo's CO2 emissions of 2.2 tonnes/head are less than half of the 30 best-ranked European cities with an average of about 5 tonnes/head, itself lower than the overall European average of 8.46 tonnes [7].

If an urbanising world is to successfully address environmental challenges such as climate change, it is clear that increasing the share of renewable energy sources is essential to the long-term sustainability and well-being of cities (see Figure 1).

Figure 1. Breakdown of urban energy use in buildings and transport by application and carrier in PJ/year [6].

Municipalities are the largest consumers of energy in the EU*** and can therefore have an impact on the European energy outlook by both diminishing energy consumption through locally-coordinated action and boosting local energy production.

For this purpose, the integration of energy demand and supply between different sectors through rigorous planning and smart technologies plays a crucial role in the transition to renewable energy production across the European urban landscape.

Depending on their population density, climate and rate of growth, the energy consumption varies widely among different cities. To scale up substantially, more focus on tailoring renewable energy strategies to specific local circumstances will have to be assessed, as a perfectly sustainable action in one city might instead lead to decreasing overall environmental performance in another.

Energy policies are usually decided at the national level, but cities have an array of options at their disposal to take a more integrated approach to multiple actions that best adapt to their different morphologies. Growth prospects, population density and geography all contribute to shaping the opportunities to introduce renewables, including their large growth potential in transport and urban buildings [5]. More decentralised decision-making on energy supply, land management and transportation infrastructure is needed to unlock technical and financial support to accelerate the switch to more autonomous cities.

A formal plan for what cities could implement to reduce their carbon impact was launched in January 2008 and committed cities to cut carbon emissions by at least 20% by 2020 [5]. However, such a goal requires a new system-level approach, in order to create synergies between the cities’ buildings and transportation means, and thus achieve a smarter integrated urban system. As renewable energy technologies spread, these two sectors will become more and more interconnected with the power system and could be used, for example, as energy storage to balance the demand and supply of electricity.

Established cities, for example, could largely rely on retrofitting to ensure that buildings maintain a minimum efficiency standard, and on the integration of technologies, such as heat pumps, rooftop solar PV and water heating to reduce the energy demand. Linkages between the power and the heat sector will have to be encouraged with the introduction of effective technologies such as renewable-based district heating and cooling systems to reduce carbon emissions. Case in point, London could move over a quarter of the way towards lowering its carbon emissions by 60% by 2025, simply through using more efficient lighting and appliances, improving building insulation and installing more advanced environmental controls [3].

Transport is another issue that cities have to cope with as it accounts for over a third of their energy usage. According to IRENA's map for a Renewable Energy Future, this trend could grow by nearly 50% by 2030 [6]. If the resulting energy demand is met by fossil fuels, it will have major adverse consequences for air pollution and living standards in cities, as well as global warming.

In transport, electric mobility, when powered by renewable sources, could have a large positive impact in an integrated urban energy system, as an average of one in three residents in European cities drive to work, contributing to CO2 emissions. Nowadays, the average proportion of renewable energy consumed in the transport sector is about 7.3%, a long way to the EU's stated goal of increasing its share to 20% by 2020 [6]. 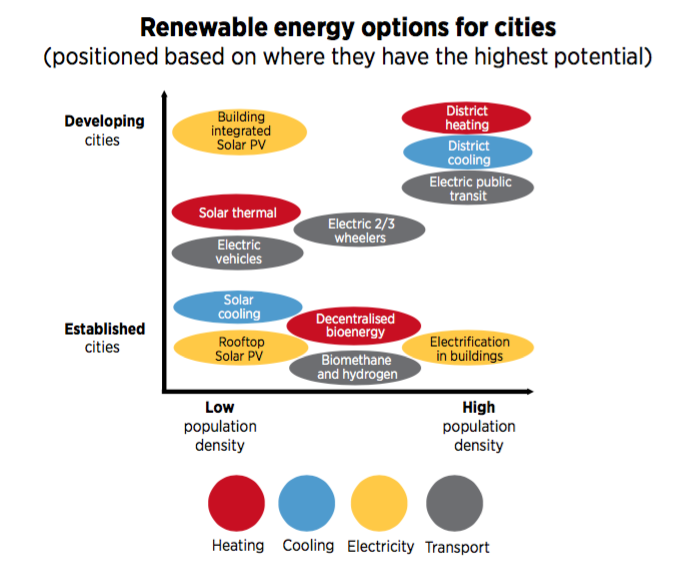 Figure 2. The potential for renewable energy options for transport and in buildings in different city types [6].

"A local, informed, participatory, balance-seeking process, operating within a budget, exporting no harmful imbalances beyond the territory or into the future, thus opening the spaces of future opportunity and possibility." [7]

This is how the Vienna Institute for Urban Sustainability defines the sustainability of a city. The implementation of such a definition requires a severe rethinking of the entire urban energy landscape, from industry to buildings, to transport and power. It requires the integration of energy supply and demand through rigorous planning, smart technologies and holistic decision-making, as well as active participation by informed citizens.

While complete energy independence in European cities will likely be very hard to achieve, the best route to meet international development targets, including the Sustainable Development Goal 11, which aims to 'make cities and human settlements inclusive, safe, resilient and sustainable by 2030' will probably require an even more diversified energy mix accompanied by a shift in mindset that considers energy as a driver for economic and environmental sustainability across the urban landscape and not only citizens as mere energy consumers [2].

The path to a solution to pave the way to a more sustainable urban energy system, even though cities widely vary by population density, size, climate and level of development does exist, but every citizen will have to become the centre of a decision-making process, involving transportation choices, as well as electricity supply and consumption.

The time is right for cities to switch to renewable solutions, and both the chances and success of the international efforts to keep climate change within manageable levels will in large part be determined by a successful transition to renewable energy generation in cities and an active participation by their citizens [6].