The Barcelona CommUnity organised a study visit to the Termosolar Borges solar thermal power plant in Lleida, Spain on 25 April 2017. Through a guided tour around the plant, the CommUnity members were able to learn more about CSP technology outside of the classroom. 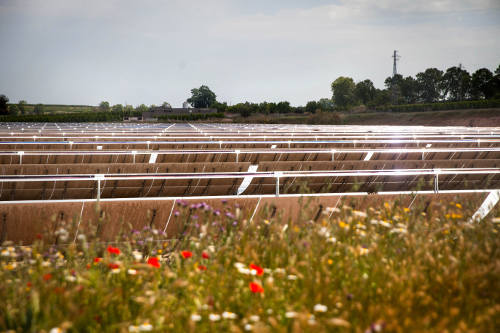 Termosolar Borges is a 26 MW hybrid solar thermal power plant located about 100 kilometres west of Barcelona. This first-of-its-kind power plant combines solar thermal power generation during sunshine hours with biomass-fired power generation in a system that allows continuous electrical production of renewable energy for 24 hours a day, 7 days a week. At 9 AM, 25 InnoEnergy students met in front of the UPC campus to head to this power plant for a study visit.

The 2 hour travel was filled with beautiful Catalan landscape and several PV panels and wind turbines, adding to our excitement. By 11 AM, we arrived to the power plant, and were welcomed by Santiago Martinez Ceballos, the manager of the power plant. Santiago guided us to the offices of the facility, where he gave us a presentation about the more technical details of the plant. The power block consisted of two 22 MW biomass boilers on par with a 6 MW natural gas one in case of an emergency. The power plant was strategically built in one of the locations with the most hours of sunlight throughout Spain, where rain is seemingly scarce. Ironically, there was a light drizzle during his presentation, and the amount of clouds didn't allow the parabolic troughs to get enough heat to drive the power trains. Therefore, the biomass combustion chambers were working at their maximum capacity. After leaving the offices, Santiago guided us to the troughs and and explained some details about their configurations. The plant consists of 33 km of collectors, following the sun’s path with automatic controllers. It was very interesting that the power plant was divided into two giant blocks, and this was because of land limitations. A Spanish high-speed train passed through the middle of these two every half an hour, making this power plant the only one in the world where a train passed through the middle of it.

Santiago then guided us to the 90-ton-capacity biomass silos, placed beside some of the troughs. The output of the troughs are affected by the locations of these silos, as Santiago commented, due to the dust making the mirrors dirty, hence reducing their thermal output. Other than the dust, we noticed dozens of birds comfortably flying around the facilities. Santiago explained that the heat the boilers released was very attractive for nesting, primarily during cold autumns and winters; additionally, a pig farm was located right beside the power plant, which attracted birds due to the amount of food available. Other than the dust, we noticed that some mirrors were considerably dirty, having their efficiency decreased with what we students called our newly created “bird-feces attenuation factor”. 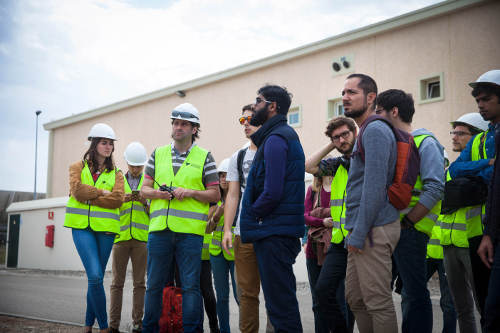 The visit ended after Santiago guided us to the control centre of the power plant, where we could see the automatic systems and how people monitored the systems. It was a very interesting visit, which I am sure everyone really enjoyed. Solar thermal power technologies are growing and becoming more attractive and mainstream among the energy industry professionals, and InnoEnergy students will certainly be a part of their diffusion. This visit gave us a real life closeup of what is about to come. 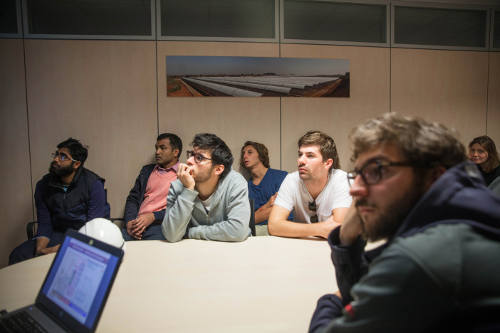 We want to give special thanks to Santiago Martinez Ceballos, Manuel Molins López and Joan Gummà Maragall from Termosolar Borges, and Iker De Loma-Osorio from the CommUnity for making this visit possible.