The Sustainability Supplement is a series of research articles prepared by InnoEnergy Master’s School students throughout several European locations. The series provides opinions and commentary on various topics including energy resources, energy efficiency, sustainability, and other topics of interest. Any opinions expressed in these articles are those of the writer and do not necessarily reflect opinions of the by InnoEnergy or the CommUnity Post.

On the early morning of November 9th 2016, many people all over the world couldn’t believe their eyes and ears when they turned on the TV or radio. Donald Trump, a climate change denier, was elected president of the biggest economy in the world – the United States of America [1]. Now, after the initial disbelief slowly fades away, it is time to take a look at how bad the situation really is. How does the political setting in Washington influence international efforts towards a “greener” planet? Can the world community keep up with the goals of COP21 [2]?

Only six months ago, the worldwide political situation regarding climate change seemed as promising as ever: Almost two decades after the Kyoto protocol (1997) and after more than 20 years of UN negotiations, the two biggest emitters of greenhouse gases, the USA and China, finally ratified the binding agreement of the Paris summit from December 20153. Already in August 2015, President Obama announced the Clean Power Plan (CPP) [4] – a regulatory policy with the ambitious goal of reducing CO2 emissions of the American electricity sector by 32 percent, as compared with the 2005 level[5].

What happened with the CPP after Trump began his presidency? On March 28th, he signed an executive order, mandating the EPA to review the plan. Considering the fact that Myron Ebell, Director of Global Warming and International Environmental Policy at the Competitive Enterprise Institute (CEI) leads the transition team of the Environmental Protection Agency (EPA), the future prospects indeed seem worse than just uncertain. CEI is a libertarian think tank that promotes limited or no government regulation on greenhouse gas emissions and reject what they call “global warming alarmism”. Changing his former style of simply denying anthropogenic climate change, Ebell recently suggested in his blog that global warming could actually be a benefit for the world [6].

"There is much evidence, that the mild global warming that has occurred since the end of the little Ice Age in the mid-nineteenth century has been beneficial for humanity and the biosphere. Earth is greening, food production has soared, and human longevity has increased dramatically"

Why do we even care?

…some Europeans might say. “Donald Trump will remain president for four years anyway, until Americans realise his inability for this mandate and vote for somebody else” - Similar comments could often be read on newspaper websites after Trump's election, probably more out of denial than out of real conviction. Despite the recent backpedalling on some of his most extreme pre-election promises [7] it is very likely that the CPP in its recent state will be comprehensively changed or fully discarded. The worst-case scenario would be that Trump and the now Republican-dominated Congress pass a bill that prevents the EPA from ever regulating CO2 emissions again. In that case, no future president could act against climate change in the way Obama did [8].

How large is the global influence of the CPP?

This question was analysed by the US Energy Information Administration for the years 2012-2040. Instead of rising by an annual 0.2%, U.S. energy-related CO2 emissions would drop at about the same rate every year [9]. This difference represents 1.6% of the total world energy related emissions over the fully investigated period [9]. While that might not seem a very high number at first sight, a closer look reveals that it equals almost half of the total OECD energy related emissions in the period, or in other words, about 550 million metric tonnes of CO2 [9]. 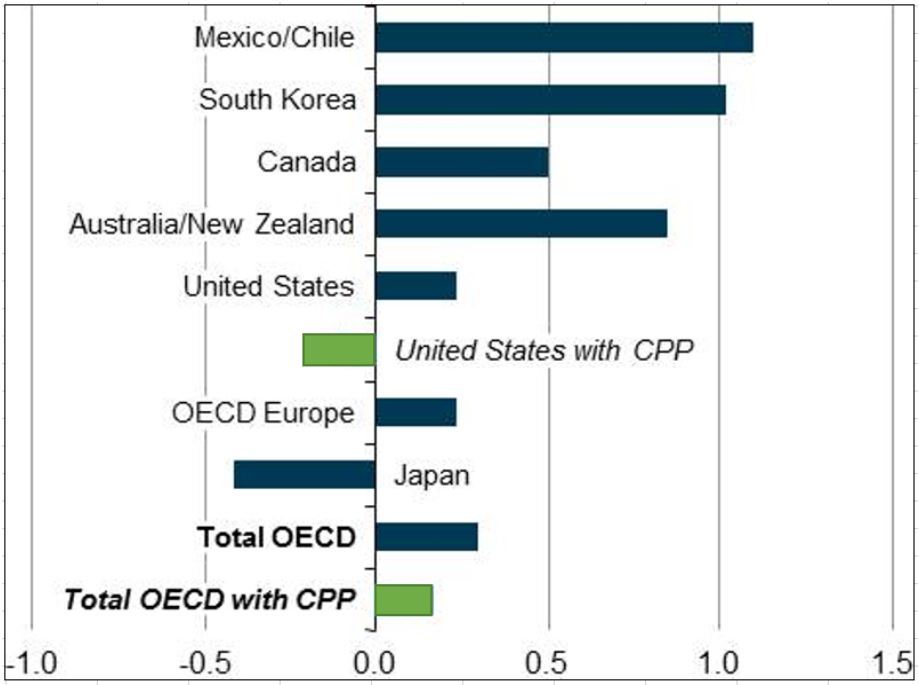 But, there is still hope!

…and it arises from the current situation on international coal markets. In fact, the CPP mainly addresses the coal power industry, as it has the largest CO2 emissions of all the fossil fuel power technologies [5]. In recent months, Donald Trump repeatedly claimed that he would boost the American economy and (re-)create millions of jobs in the coal industry by cutting restrictions, offering tax breaks for coal companies and withdrawing a ban on mining on federal land by the Obama administration [10]. A decline of coal production in the U.S. has been noticeable already for many years. The main reason for it, however, is not regulatory measures as Trump claims, but market-driven forces in response to lower natural gas prices that made the operation of gas power plants more economically attractive [11].

Another factor is the international demand for coal. Just on November 21st, Canada – the neighbouring country and 5th greatest importer of U.S. coal – announced to speed up the transition towards clean energy and consequently phase out coal power by 2030 [12]. Similar efforts in other countries all over the world, not least on the basis of the COP21 agreements, lead towards a decreasing demand for U.S. coal [13]. 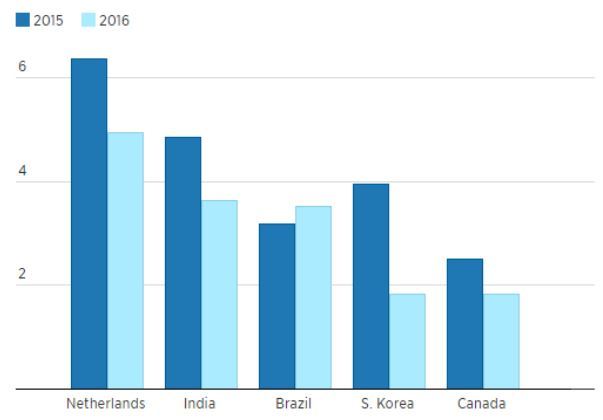 U.S. coal exports (to the 5 largest purchasers) for the first six months of the year in millions of short tonnes [21]

Is the economy the real authority?

The described shrinking process of the international and American coal markets leads to two conclusions:

First, Barack Obama's decision to introduce the CPP in the middle of 2015 represents his political and tactical abilities. Since the coal industry was already on the decline, restrictive policies in terms of CO2 emissions were actually not as revolutionary as they might have seemed at first glance. Obama and his consultants recognised the trend, and by establishing policies in the same direction and publicly showing their concern for environmental issues, they acted in a way that produced the most political value out of the situation.

Second, it will be immensely challenging for Donald Trump to impose his election pledges regarding the coal industry. Even upon withdrawal of the CPP and thereby certainly making coal power more economical to some extent, the market situation seems to be too much of an obstacle to reanimate the industry to the promised level.

To what extent can politics influence the existing energy market situations in general? Regarding the described situation with Donald Trump, it might be comforting to know that politicians have to follow economic tendencies. On the other hand, it would be frightening if policymakers never had the ability to counteract.

…in economic terms and their influence on Trump's possible courses of action, as discussed before, represent only one aspect of a much larger development of ever-growing worldwide interconnectivity, commonly known as globalisation. Nowadays, airplanes and the internet connect everybody and everything. Finding any needed information is possible in seconds; travelling to almost any country in the world is possible in hours.

For Simon Anholt, a British Honorary Professor at the University of East Anglia and independent policy advisor, globalisation provides many opportunities and threats for mankind at the same time [14]. In 2014, he founded the Good Country Index, a ranking system based on UN data which measures how much each country on earth contributes to the common good of humanity and what it takes away, in relation to its size [15]. The “gooder” a country is, the higher it is in the ranking. “Problems like climate change, pandemics, migration, human trafficking, terrorism and economic chaos are multiplying because of globalisation” Anholt says in his TED talk [16], as “one person with a cold can cause a pandemic, one geek with a laptop can shut down the power grid, one bad bank can bring the global financial system to its knees”.

In Anholt’s judgement, “these problems are too big and too connected for any one country to fix them” [15]. He detects the main complication in the fact that governments are entirely focused on their national interest. They are looking for opportunities to make themselves richer, happier, safer, stronger without worrying about the negative impacts on the rest of the world. The reason for that, says Anholt, is the fact that the rest of the world are foreigners, “…and foreigners can’t vote”.[15]

…was Donald Trump’s campaign slogan. Will he?

Trump aims to maximise the monetary profit of his country without caring what happens to other humans all over the planet and the health of the planet itself. He wants to keep the society as homogeneous as possible by not letting people of other nationalities immigrate and integrate. He promotes a culture of discriminating opponents instead of treating them with respect. If those characteristics are considered “Great”, then yes - he might make America great again.

But will he make America a better – a “gooder” country – which dares to look beyond its borders with an open mind towards learning from other cultures, which approaches challenges in a pragmatic but sensitive way and which considers the impact of its politics for all mankind and not only for Americans? The answer is certainly no – he won’t.

In 2016, Simon Anholt founded another project: Global Vote [17]. It’s an interactive website which lets people from all over the world “take part” in national elections. These online elections are obviously of symbolic nature. The results for the U.S. election from 8th November 2016 received 52% of votes for Hillary Clinton (compared to 48.2% in the real election), Donald Trump obtained 14% (46.3% in real election). Green candidate Jill Stein received 19% (1.06% in real election). [18]

One final remark: The political movement Good Country is created by Simon Anholt and a small group of volunteers, with no outside funding whatsoever [19]. Currently, the United States are ranked #20 of the Good Country Index (34th in the category Planet & Climate) [20]. Where will they be in four years?