One of the pillars on which the InnoEnergy is build is the collaboration between the students and the partner companies. A good example of this integration, where the theory of books intersects the practice of the industry, is given by the Iberdrola challenge. Iberdrola, one of the most important energy players on European level, invites each year students of several Master programmes at EIT to develop a solution for what it believes to be the most challenging topics that the energy sector is facing today. This year the three topics in which the students competed where: global affordable energy, new digital models in energy and social economy for affordable energy. Three students enrolled in the SENSE Master Program placed 2nd and look forward to developing their idea with the collaboration of InnoEnergy and its partner. 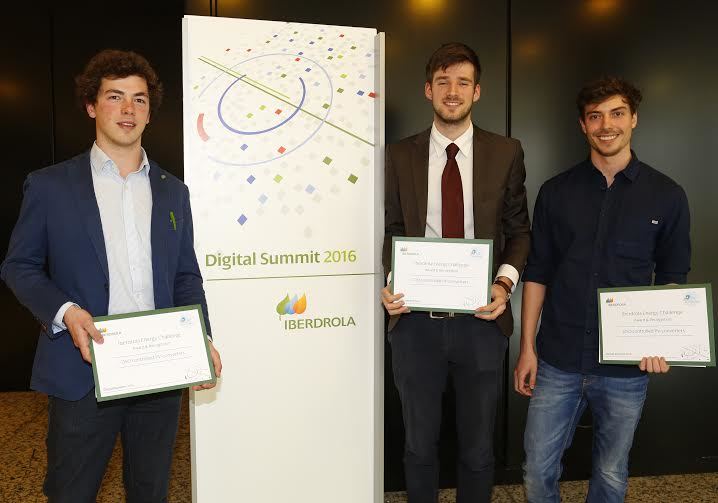 In today’s rapidly changing energy landscape, residential customers are more and more often installing photovoltaic panels (PVs) on their rooftops. This trend is driven by environmental awareness and incentives issued by the government, that reduce the return of investment of PVs to ca. 15 years.

If, on one hand, PV panels represent the ultimate achievement of a greener household consumption, on the other hand, they represent a threat to the stability and security of the system since their injection of power on low voltage grids may lead to violate  the voltage security boundaries.

In an electrical system, two types of power are used. One is called the active power, and it can be transformed into kinetic power and can therefore be used for different purposes. The second is called reactive power, and it represents an energy flow between different parts of the system. It is important to regulate the voltage level but cannot be physically transformed and therefore used for the purposes electricity is used. The reactive power is not paid, since it is not used for any application, although it plays a key role in the grid management. Every PV panel is connected to the grid through an inverter, which converts the voltage and current output from DC (direct current) to AC (alternate current). By modulating the converter, it is possible to vary the contribution of active and reactive power.

The “Remote controlled PV-Converter”, ideated by Manuel Ostertag, Michiel Develter and Ladislau Zoltan Reider, students of the SENSE InnoEnergy master program, was awarded 2nd place in the Iberdrola challenge and could be a key for a better integration in the low voltage grid. The invention allows the DSO (Distribution System Operator) to remotely control the reactive power. User’s earnings do not change, since the active power output remains untouched. This gives the DSO a degree of freedom to operate the network, while the PV owner receives some benefits, such as electricity bill reductions. Managing the grid in a smarter way prevents the DSO from investing in otherwise expensive and slow-to-build new infrastructure. The invention can be defined as a service for improved grid reliability and safety provided by residential customers, and managed by the DSO.

Michiel recently turned 22, comes from Belgium and performed his bachelor’s degree in Leuven in Energy Engineering. Manuel comes from southern Germany and studied in Stuttgart. As part of his bachelor thesis he worked on some aspects of low voltage electricity distribution. Ladislau comes from Romania and also has a background in electrical engineering. All three are enrolled in the SENSE Master programme since August 2015 and explained  us how the idea came about. “Everything started back in late December, when we received an invitation email for the Iberdrola challenge” – says Michiel – “It looked interesting and professional and we all were frenzied of testing our entrepreneurial skills”. “For such a project the team is everything, so better to have some fun and team up with some friends”, adds Manuel. The trio decided to meet up and brainstorm about possible fields in which they had enough knowledge to create an innovative impact. Manuel had some relevant background in the field of distribution due to his bachelor thesis. Quoting Ladislau: “technical problems require technical solutions, so we first focused on how to solve the technical aspect and then how to make money out of it”. The investigated topic and the related issues are faced by many DSOs right now, which have to cope with an increasing number of panels installed. This is one of the reasons why Iberdrola experts awarded the idea during a convention in Madrid.

The whole competition was open to InnoEnergy students, with almost 50 teams to reach the final stage. “It is a learn-by-doing process”, states Manuel, “you start with just an idea and end up learning how to do a business canvas”. The idea seems to have gone far, circumnavigating the globe on social media. Asking Michiel for a last impression, he concludes: “I was impressed about how much our idea was valued, not only by InnoEnergy and Iberdrola, but also outside”. The three students received validation by some experts outside of the supportive InnoEnergy environment, and are now thinking of going further. “The  bonus of this invention” -affirms Michiel- “is that we can start small, convincing a few potential customers to install our device, making our target scalable in line to our capacity”. The first crucial step is to find a DSO to start collaborating with and hopefully the InnoEnergy network will be able to bridge this gap. The startup process is long and full of obstacles. Much can occur between an idea and its realisation. However, creating the best environment for the launch of a company is InnoEnergy's first priority. InnoEnergy provides the knowledge through its highly ranked university partners and bridges the distance between education and industry by supporting its community. The innovation part is left to its smart protagonists.

The Path to Entrepreneurship