The Speaker Series are informal and open talks organised by the These feature professionals from the energy sector who want to share their innovations and experiences with a large InnoEnergy community, made up of entrepreneurs, researchers, alumni and students, and encouraging a networking environment.

The first Speaker Series presentation in Barcelona in 2017 was also another first. For the first time, this event was broadcast live on the internet for all to see and proved very successful as several hundred viewers followed live over the course of the event. This will be a new way to attend CommUnity events to come as we remain mindful that our colleagues are located all over Europe and beyond. It was fitting indeed as the topic of the event concerned all of Europe. Santi Martinez, CEO of Estabanell Energia, delivered this edition of the speaker series regarding the structure of the European Union governing bodies and the Winter Package Electricity Directive recently released by the European Commission.

To introduce the talk, Santi gave a brief (and very helpful) overview of the construction of the EU governing parties to bring the audience to the same page in understanding how the EU functions. In essence, the European Commission (EC) is the executive of the European Union and promotes its general interest. The European Parliament (EP) is the only directly-elected body of the EU. The 751 Members of the European Parliament (MEP) are there to represent you, the citizen. They are elected once every five years by voters across the 28 Member States (as of today, the UK is still ‘officially’ part of the EU) on behalf of its 500 million citizens. The European Council defines the EU’s overall political direction and priorities. It is not one of the EU’s legislating institutions, so it does not negotiate or adapt EU laws. Instead, it sets the EU’s policy agenda, traditionally by adopting ‘conclusions’ during European Council meetings which identify issues of concern and actions to take. The Council is composed of 28 national ministers (one per state).

On 30 November 2016, the EC published the “Clean Energy For All Europeans” package, more commonly referred to as the “Winter Package”, which consists of numerous legislative proposals aimed at further completing the internal market for electricity and implementing the Energy Union. The Winter Package has the following key aims:

The Winter Package includes several Proposals to accomplish these aims. These Proposals are for:

For access to the full communication for the European Commission, follow this link. Linklaters also provides a detailed summary of the aspects of the document here. 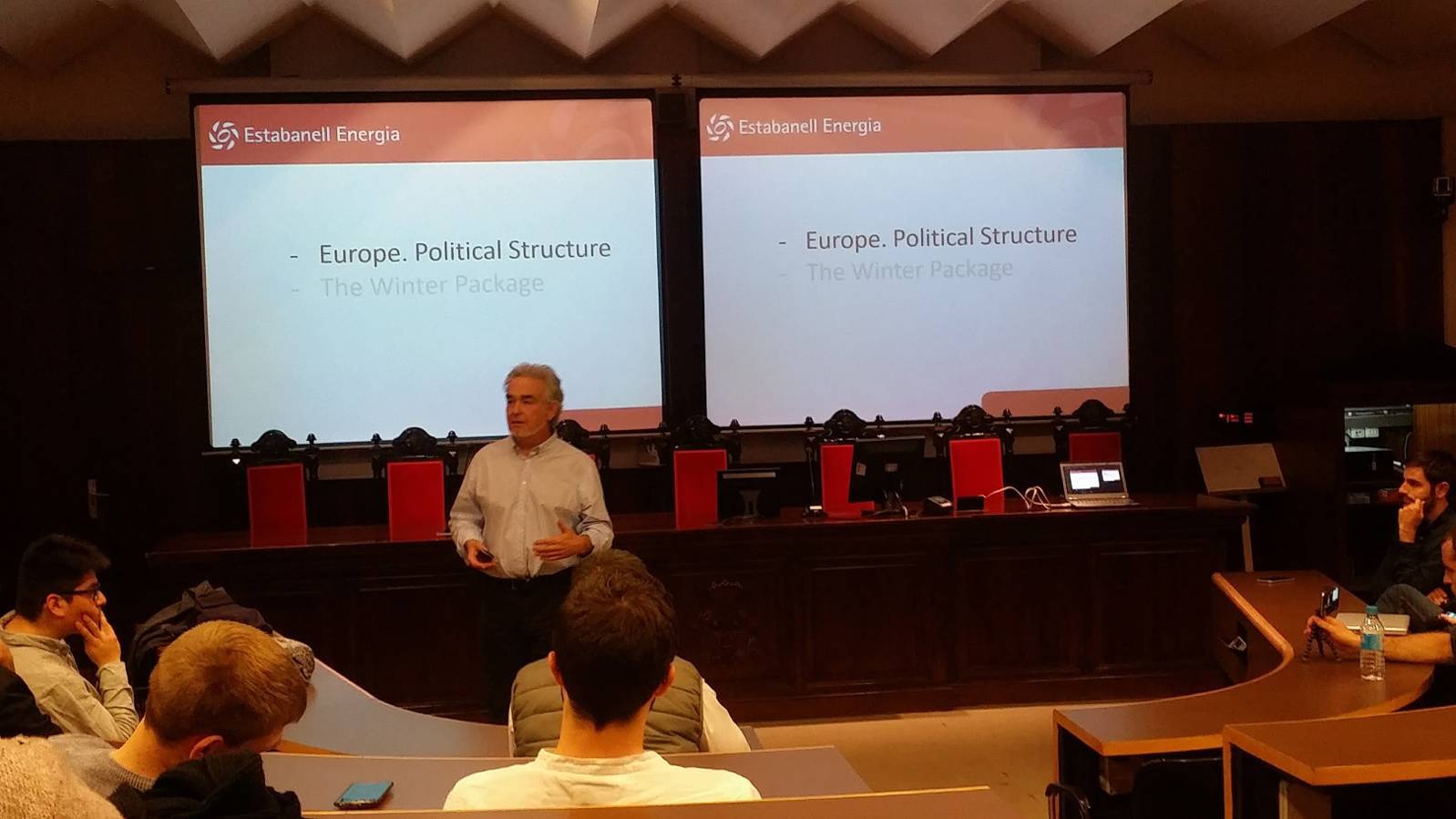 Santi Martinez, CEO of Estabanell Energia, gives the February edition of the Speaker Series in Barcelona on the European Political Structure and the Winter Package Directive

Santi then proceeded to summarise how the most critical articles of the Winter Package would affect the operations of DSOs and retailers. As the official title, “Clean Energy For All Europeans” would imply, the directive focuses greatly on the final customer. The articles in the directive focus on Dynamic Price Contracts (Article 11), Supplier Switching (Article 12), Comparison Tools (Article 14), Prosumer Rights (Article 15), and Local Energy Community Entitlements (Articles 16). If the image of the new energy market outlined in the Winter Package is realized, it will be a great paradigm shift that empowers final customers in a large manner. Final customers have to be fully informed by the suppliers of the opportunities and risks of such dynamic electricity price contracts upon the customers’ request. Final customers will have the right to change a supplier quickly (within three weeks) without any related fees incurred. Final customers will have access to compare the services of various providers and thus, make more informed decisions in regards to their energy sources. The Package will also promote the inclusion of ‘prosumers’ into the energy grid which will allow for autonomous management of smaller ‘community networks’. These networks will benefit from non-discriminatory treatment in regards to their activities, providing less barriers for prosumers to take active part in the energy supply grid. This more transparent, consumer empowering, directive is in contrast to what is present today as Santi gives an example of an unnamed company (a competitor of Estabanell’s) that is currently advertising their services by stating that they will give a discount on switching fees, a service which is already free. At the same time, another one of Estabanell’s competitors is charging three euros per month for metering—another free service which a retailer is already required to provide. Hopefully with the new directives, the number of energy consumers who are misled by ploys like these will be greatly reduced, allowing for companies operating with integrity to thrive.

In the same way the topic of the Winter Package essentially describes how the final customer will be provided with new ways of consuming their energy, the event that delivered this topic also provided the CommUnity with a new way to access to many more insightful events like this and a further geographic reach to be ‘present’ for such a talk. Be sure to catch the next event streamed live and join the conversation on this topic. What is your opinion on the European Commission’s Winter Package Directive?

Through the eyes of: André Moura

Building a "Sustonable" Collaboration with HighTechXL by Eindhoven IE CommUnity