The Speaker series are informal and open talks organised by the InnoEnergy CommUnity. These feature professionals from the energy sector who want to share their innovations and experiences with a large InnoEnergy community made up of entrepreneurs, researchers, alumni and students, and encouraging a networking environment.

This Wednesday’s (23.11.16) Speaker Series event at UPC featured Guillem Corominas, the CTO and Co-Founder of DEXMA, an Energy Management Software company, based out of Barcelona. 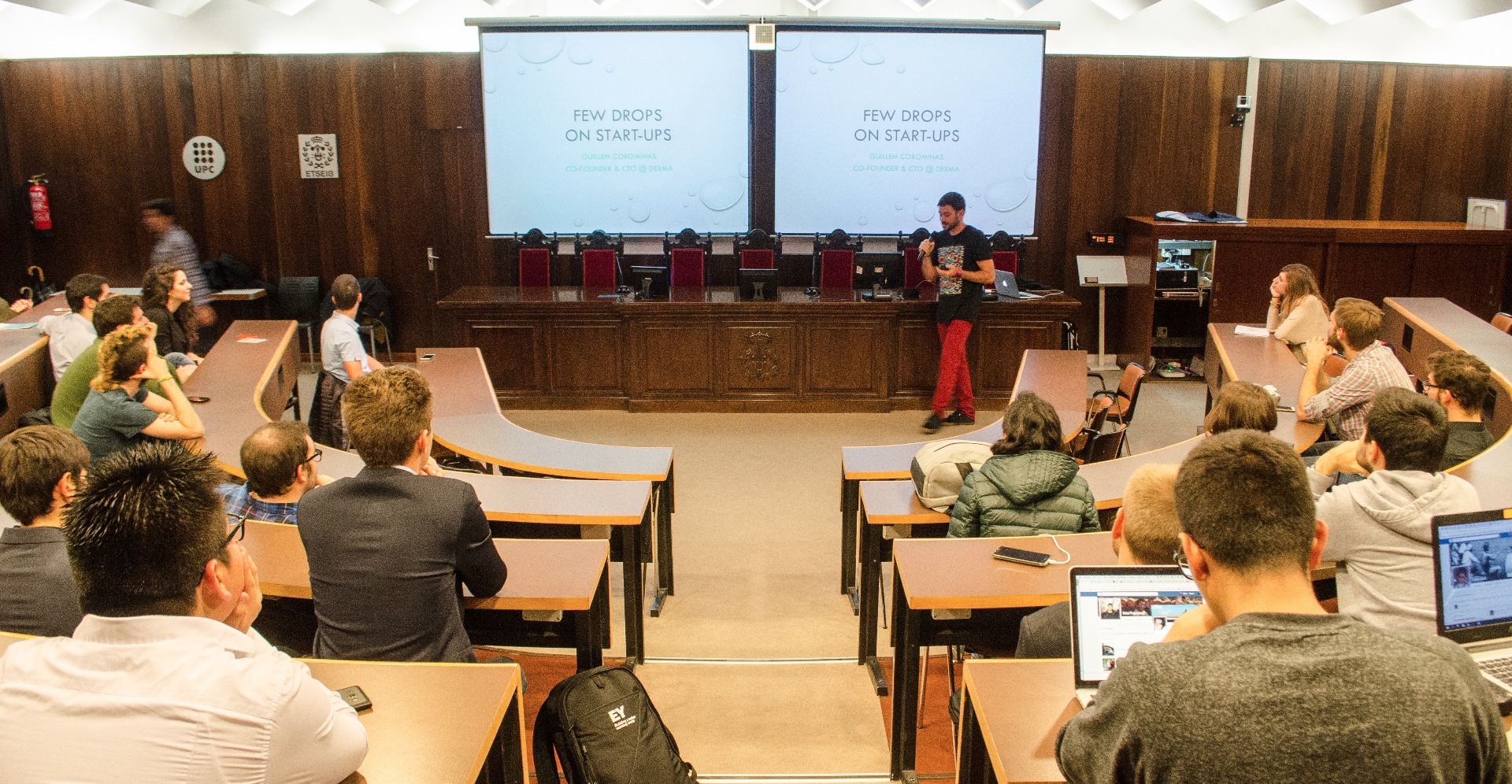 Rather than talking about the product itself, Guillem was there to discuss the valuable insights he has gained in getting his own energy company off the ground. He started out with the importance of starting early. If someone wants to be an entrepreneur, doing is better than thinking. While there are disadvantages to it, starting young comes with little to no other responsibilities, a fresh & creative perspective and more leeway to fail.

Guillem then talked about the importance of embarking on this journey with others, and not just by yourself. He emphasised how difficult starting and growing a startup is and argued that having others not only allows for multiple perspectives, it also allows for emotional support during difficult times. While he stressed how important it is to have other founders, he also pointed out how critical it is that these other founders share the same vision, goals and work ethic. Otherwise, there will be strains in their relationships, which would negatively impact both the rest of the team and the startup.

He then went into the finer details of the startup process, including the importance of distributing equity wisely. Giving someone equity means giving them partial ownership of the company and thus, should be well thought out. He suggested distributing it among founders, mentors, investors and key employees.

Next, Guillem focused on the difference between invention and innovation, two terms that are often confused with each other. While invention involves creating something new, innovation involves creating new value. The difference between the two is subtle yet very important. It also reinforces what some of us learned at ESADE Business School during our InnoEnergy programs. Creating something new for the sake of it is not as useful as creating something that brings new value to someone in society. As engineers, innovation sounds technological to us but Guillem gave us examples of companies such as Dropbox and Ryanair, which were primarily business model innovations using tried-and-tested technologies.

Then, Guillem reinforced what many of us have learned about the startup culture and the need for pivoting. This means constantly re-evaluating your idea after gaining feedback from potential customers, and tweaking it to create a better product-market fit. He went on to talk about the art of people management and specifically: hiring slow and firing fast. As a founder, he emphasised that it is essential to bring the right people on board (given the limited resources) and to remove potentially toxic people quickly, as a start-up does not have the luxury of a prolonged bad hire.

Guillem ended the session with the importance of having fun. In all the things we learn about entrepreneurship, this one is the most important, he said. Since you would be spending such a major part of your life on your startup, if the process itself is not fun, everything becomes significantly more difficult.

Overall, this speaker series was very inspiring. Guillem’s insights were honest and realistic, giving practical advice on hurdles that startup founders face everyday. He did not glorify the startup life, as is often done, but he did indicate how rewarding it could be. As InnoEnergy students, this kind of down-to-earth, meaningful advice is particularly useful as we seek to use the skills we have learned from courses, in the real world.