Women4Tech: Challenges and How to succeed as a Woman in Tech 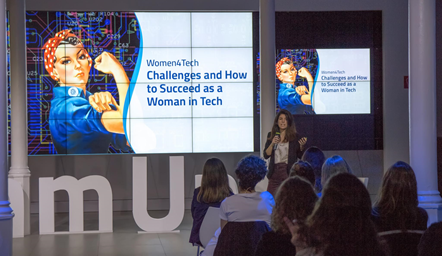 For many of you who are reading this article now, the event that took place in Barcelona a couple weeks ago may seem only one of the thousands of events about gender equality organised by women for women.

Well, this is not the case. Yes, the Women4Tech idea came after having realised that the path for women to be recognised as equal to men in the technology field is still quite uphill. But also from the awareness that, in this journey towards the top, men can play an active and supportive role and not be perceived as an obstacle. That is why the whole event was thought out and designed to be appealing for everyone, without distinction.

The goal was sharing the experiences of female entrepreneurs and scientists who are working in the tech field to understand how they managed to overcome challenges typically present in a world where higher positions in companies are still mostly occupied by men.

The event started in the amazing venue of Mazda Space, in the characteristic neighbourhood of El Born. After the presentation of the CommUnity video, the three speakers invited started their presentations: Alicia Andúgar, engineer and CCO of Smartive, a startup that uses artificial intelligence, cloud computing and data mining algorithms to provide accurate real-time data analysis to supervise, monitor and diagnose the performance of wind turbines; Katerina Zalamova, physicist with a degree in Quantum Mechanics and Laser Techniques working between Sofia and Barcelona and currently CEO of Crea Idea Lab, who is helping entrepreneurs to quickly validate their business ideas before launching their startups through her own pre-incubation programme; and finally Laura Fernández, CEO of Future Founded, the only crowdfunding platform that provides the necessary funding for women to learn tech skills.

The panel discussion that followed the individual presentations of the three speakers were moderated by Anna Grau, founder of Young IT Girls, a non-profit organisation focused on inspiring future generations of girls to pursue an engineering or technical career.

It was really clear from the beginning that the speakers had different backgrounds and that the experiences they had were quite different, still with many points in common. The speakers were asked to give inputs about the way they deal with salary negotiations, family planning, credibility and false perceptions.

Alicia explained how she was convinced by her sister to pursue an engineering career and how she managed to create her own space in the male-dominated energy world.

The passion arose from, in her opinion, the fact that she always pushed to go on and overcome the difficulties. This was also mostly the reason behind her multiple successful achievements, for example when a small company she was working in became a very important multinational company (Alstom) after just a few years. Besides the working life, her personal one also played an important role: a few months ago she decided to temporarily leave her job in Smartive to stay with her kids more.

Katerina is a physicist and researcher and she experienced the same challenge as Alicia. She focused her presentation on the challenge of being at the same time a scientist and a mother and how difficult it can be for a woman to combine the two worlds. At the moment, with the company she founded, she is trying to empower women that have left their job for maternity to come back to work, as she did. Nowadays, there are many 40-50 year-old mothers who feel they need to conform to the role of the “housewife” who raises the children and doesn’t end up working again, or, to the one that pushes them to take a temporary break from a job that in reality is really difficult to return back to again.

The culture of the country is an important factor to consider, in her opinion, as different countries have different ways of approaching the maternity question; this problem should be addressed at every level of the society in order to not lose the expertise that these women in tech can bring.

Laura, on the other hand, had a completely empowering point of view and also a completely different background, having worked in cinematography for several years. She was the youngest among the Women4tech speakers and explained to us why she wanted to start in the tech field. She said that she was really motivated by a colleague who supported her to follow her instinct and to pursue her dream of creating the first crowdfunding platform exclusively for helping women educate themselves. She is very convinced that the future is all about technology and we cannot miss out on the chance of having as many women as possible involved. To send this message even more clearly, she was wearing a T-shirt with: “the future of tech is female” . 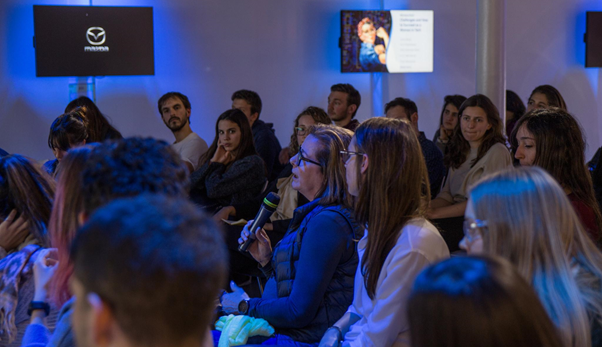 Since the event was designed to be as dynamic as possible, the panel discussion where the three speakers could interact with the moderator and with the audience was aimed to represent an important part of the event. And the goal was accomplished!

The audience was made up of students, professionals and associations and all of them participated with questions and input for the speakers, who, guided by the moderator, pointed out interesting topics:

A networking session with drinks and snacks concluded the event and it gave everyone the chance to speak directly with the presenters and to exchange thoughts and impressions on the topics discussed.

Overall, the organising team is really satisfied with the outcome of the event and it is looking forward to organising many more! 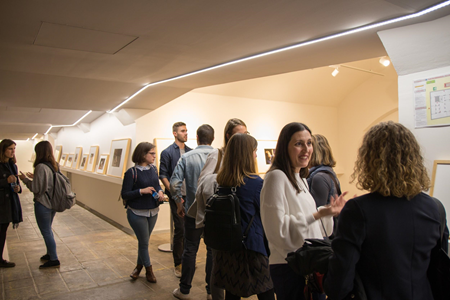