The Sustainability Supplement is a series of research articles prepared by InnoEnergy Master’s students throughout several European locations. The series provides opinions and commentary on various topics including energy resources, energy efficiency, sustainability, and other topics of interest. Any opinions expressed in these articles are those of the writer and do not reflect opinions of the by InnoEnergy nor of the CommUnity Post. If you have an article that you would like to be shared in the Sustainability Supplement, message us at the  on the Platform.

Energy security is a concern that has remained present in the last several years. From the shift of using coal as the foremost fuel of naval vessels in 1911, to the efforts involved in diversifying energy resources against the dependency on oil in the 1973 Iranian Crisis, different actors in the European community have set policies and enacted strategies to guarantee the short and long term availability of energy. In the meantime, their agendas have aided in clearing a path towards the sustainable development of European countries.

In 1911, coal was the primary source of energy for naval vessels. Nevertheless, First Lord of the Admiralty Winston Churchill made a historic decision: to shift the power source of the British navy's ships to oil (Yergin, 2006). This meant the British navy would start depending directly on the supply from Persia, moving from the overall dependence on Wales, where coal was primarily extracted. This change towards an uncertain reliance on a distant region for the oil supply raised concern about Energy Security, to which  Churchill commented “safety and certainty in oil lies in variety and variety alone” (Yergin, 2006).

Following the Second World War, the countries comprising the Organisation for Economic Cooperation and Development (OECD) became greatly  reliant in the energy resources of the Middle East (Chester, 2010). Since the oil crisis during the Iranian Revolution in 1973, efforts have been transitioning towards other energy resources. These oil shortfalls led to the establishment of the International Energy Agency (IEA), with the affiliate’s agreeing to hold emergency oil reserves  in case of a future supply shortage.

Today’s energy sector is highly dependent on foreign energy supply. Europe, for instance, imports a 53% of all the energy it consumes at a cost of more than €1 billion per day (European Commission, 2015). Threats of terrorism, instability in some exporting nations, geopolitical rivalries, and scarcity of supplies have fueled an energy security anxiety in the region in the last several years (Yergin, 2006).

Energy Security is a matter of great importance to communities worldwide, due  to the great relation between social development and energy availability. The IEA defines energy security as “the uninterrupted availability of energy sources at an affordable price” (International Energy Agency, 2016). The lack of a stable supply may trigger a high volatility of prices of energy, generating a negative economic impact to communities. The total unavailability of supply could completely halt social and economic development, bringing great instability to the overall well being of society.

Experts point out there are various principles to maintain Energy Security. One method is increasing the diversity of the energy supply (IIASA, 2012), providing flexibility in case of disruption from one source. A second principle is resilience, or a security margin, including the implementation of strategic reserves and supplementary strategies in case of large-scale disruptions (Yergin, 2006). The third principle is ensuring a high-quality flow of information about world markets and energy prospects to assure constant feedback over the network (Yergin, 2006).

The countries of the EU are highly dependent on foreign energy imports. As of 2015, 90% of crude oil, 66% of natural gas, 42% of coal and 40% of nuclear fuels relied on producers outside the EU (European Commission, 2015). In response to the ongoing concerns about the EU’s reliance on energy imports, in May 2014 the European Commission introduced the Energy Security Strategy, aiming towards a stable and plentiful supply of energy. This program introduced two main pathways. In response to incidents such as the Russian-Ukrainian gas crisis of 2009, a short‐term energy security strategy focused on addressing the vulnerability to physical disruptions that could last for days or weeks was established, such as creating coordinating mechanisms in case of emergencies, or maintaining minimum stocks of crude oil and/or petroleum products (EuroStat, 2016). Another long-term strategy focuses on increasing the energy production in the EU (mostly through renewable resources), increasing the energy efficiency in buildings and industry, diversifying supplier countries and routes, and pursuing sustainable relationships with external energy suppliers. In Figure 1, the 186,132 km of natural gas networks within Europe are shown. Existing network is shown in blue, while planned pipelines are shown in red. 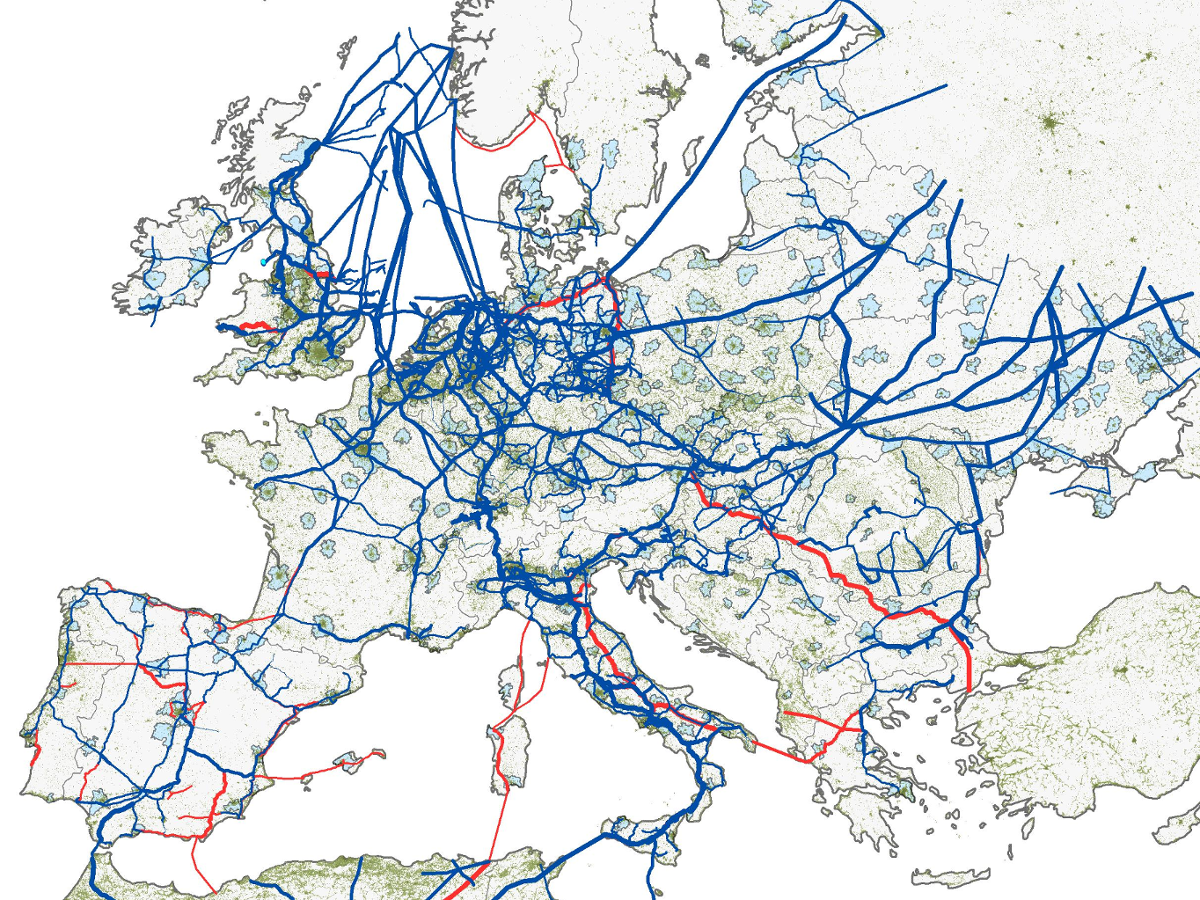 Future of Energy Security in EU

There have been several distinct events in the recent years with great impact on the energy system. With the COP21 Summit in Paris, 187 countries agreed to strive for a global warming no higher than 2ºC above pre-industrial levels, having the EU countries migrating away from the reliance on fossil fuel technologies. The European Parliament, through the Renewable Energy Directive established that the EU must provide 20% of its total energy needs with Renewables by 2020 (European Parliament, 2009), and 27% by 2030 (European Commission, 2015). In 2016, the European Commission presented a new package with measures for the EU to remain competitive in the clean energy transition, committing to cut its CO2 emissions by 40% in comparison with 1990 levels (European Commission, 2016).

The former initiatives, in conjunction with the Energy Security Strategy, have built a path towards  an energy secure EU. The statistical office of the EU, Eurostat, forecasts that the overall portion of energy produced from renewables will increase over the next several years, as presented in Figure 2. 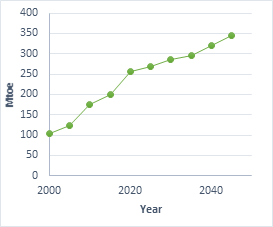 As mentioned above, one of the emphases on the Energy Security Strategy of the EU is increasing the energy efficiency on buildings and industry. According to Eurostat, there will be a declining trend on the Energy Intensity of the Economy over the next following years. The Energy Intensity of the Economy is defined as the ratio between the gross inland consumption of energy and the gross domestic product (EuroStat, 2014). Lower energy intensities indicate a lower price to convert energy into GDP, thus a higher energy efficiency. Figure 3 shows the forecast of the evolution of the energy intensity in EU until 2050. 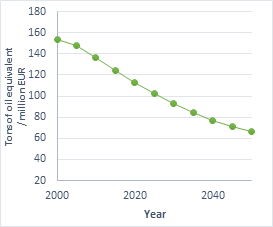 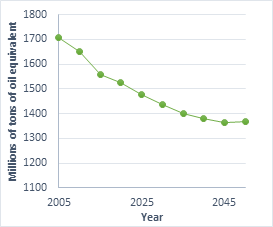 With the implementation of the various initiatives promoted by the EU, the dependency over foreign energy resources is expected to decrease, as shown in Figure 5. Nonetheless, the reliance on resources such as oil will remain high due to the low availability of these resources in European countries. The long-term Energy Security Strategy states that the share of renewables on the energy mix must increase and aid in the decarbonisation of the system. 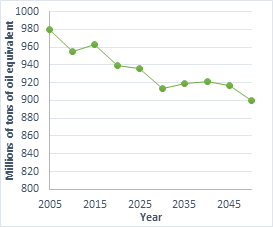 Energy Security is a critical aspect for the sustainable development of any society. EU countries have been highly dependent on foreign supply, triggering potential risks such as shortages of supply due to political instability or infrastructure damage. The European Commission has undertaken various programs to ensure the continuous supply of energy within its territory. The forecasts by EuroStat have shown that the increase of renewable energy in the energy mix, the pursuit of decarbonisation and the enhanced energy efficiency will further reduce European dependence on energy imports. Additionally, the Energy Security Strategy has promoted the diversification of suppliers and building sustainable relationships with these, hence reducing supply vulnerabilities. These agendas have led the EU towards securing its energy supply within its borders.

European Parliament. (2009). Directive 2009/28/EC of the European Parliament and of the Council of 23 April 2009 on the promotion of the use of energy from renewable sources and amending and subsequently repealing Directives 2001/77/EC and 2003/30/EC.

EuroStat. (2014). Retrieved from Energy intensity of the economy: http://ec.europa.eu/eurostat/en/web/products-datasets/-/TSDEC360