Corporate procurement of renewables involves companies acquiring some form of renewable electricity production, usually to offset their own consumption. Over the years, many of the world’s largest companies have pledged to offset some or all of their consumption with renewables. Prominent examples include Google, IKEA, Bank of America, Coca Cola and more that want to go 100% renewable.

Why does any of this matter though? Three reasons:

But why would a company, specialized in an entirely different sector and aimed primarily at earning profits, be interested in this area? There are three main reasons, in order of decreasing importance:

So this is a whole lot of talk, right? What’s really been done about it? The figure below shows the corporate renewable deals completed in the US, as of September 2017.  As can be seen, the market has grown significantly in the past few years and now includes firms like Goldman Sachs, T-Mobile and Anheuser-Busch InBev - all representing a variety of sectors beyond the giant IT firms that were early movers in this space. 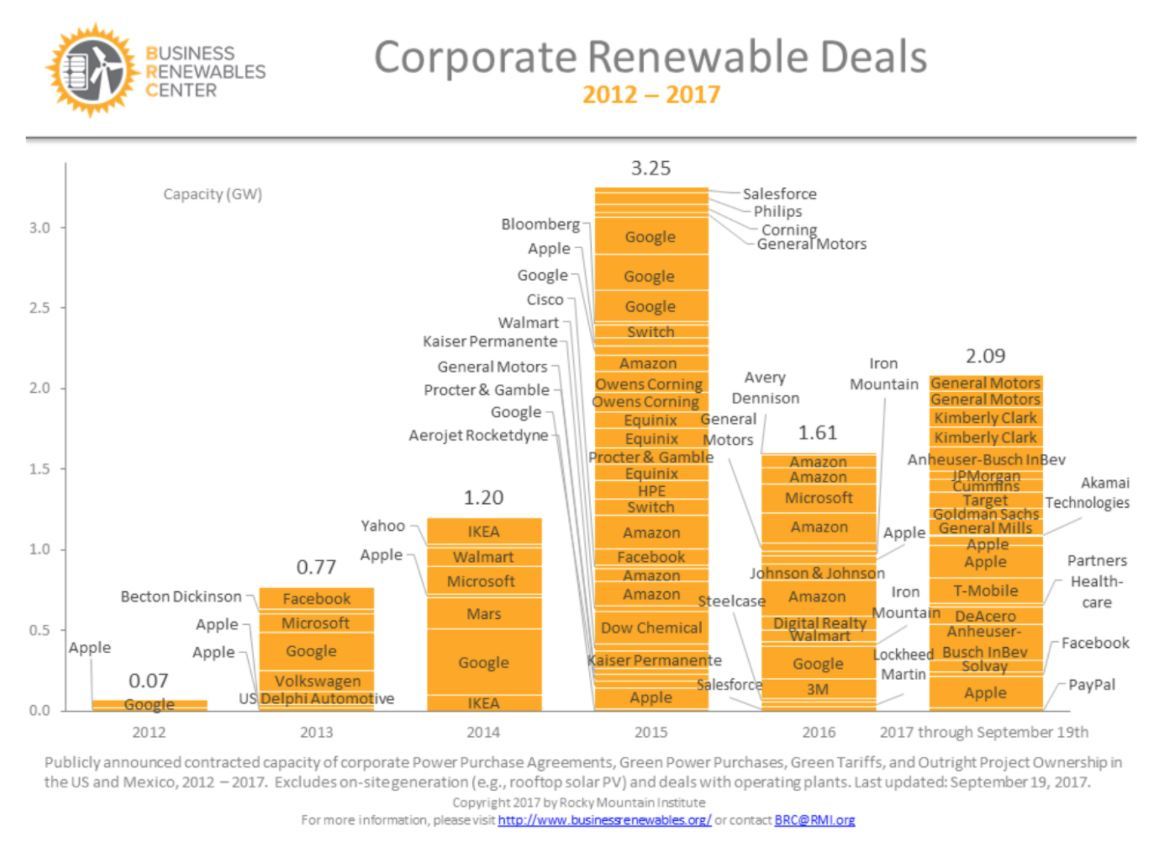 Thus far, we have had an introduction to the corporate renewable space, why it’s important and why it exists. We will now briefly look at how exactly corporates are engaging in this space.

Companies elect to do onsite renewable procurement for two reasons:

However, for almost all major corporations, onsite renewables cannot be used to offset their entire consumption just due to lack of space, and so their strategy must be supplemented by off site solutions.

While regulation around offsite solutions varies across countries, one of the more powerful instruments to enable offsite solutions in the US has been the Power Purchase Agreement. This can only take place in deregulated markets (i.e. markets where any entity can buy or sell power in wholesale and does not need to go through a utility) and involves a contract between two parties. In this case, one of the parties is a corporation and the other is a renewable energy developer (i.e. a company that develops a renewable energy project from conception to installation). Power purchase agreements are largely responsible for the explosive growth in corporate acquisition of renewables we saw in the previous figure.

This is a topic with much more depth than what is being presented here and it is a space to watch - there are a myriad of innovations occurring to satisfy corporates’ increasingly diverse needs for renewables!

If you’re interested in reading further on this topic, I’d suggest looking at reports from GreenBiz, WWF, WRI and Deloitte on this area. Also, please feel free to reach out to me at rachitkansal93@gmail.com for feedback, comments, questions and of course, appreciation!