The InnoEnergy MSc SELECT programme has three first year locations: Universitat Politècnica de Catalunya (UPC) in , Kungliga Tekniska Högskolan (KTH) in , and The Open University of Sri Lanka (OUSL). Pioneering the future of education, first year classes are followed by all students whether the lecturer is located at UPC in Barcelona, Spain or KTH in Stockholm, Sweden, through a remote classroom system. First year students established a physical connection for the first time at the SELECT Fall Seminar. 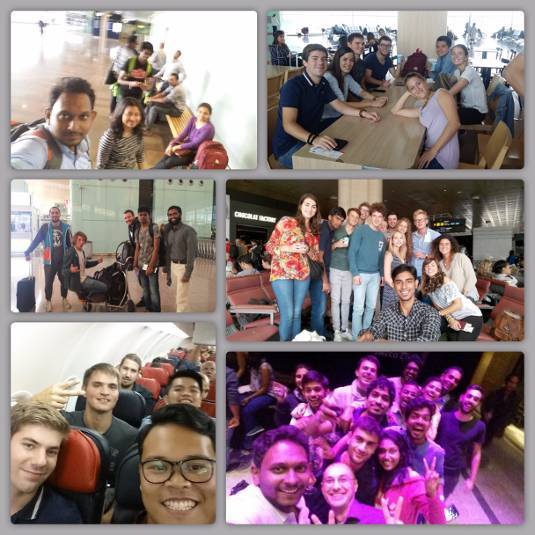 The remote classroom system was introduced only a year ago in the SELECT programme, and thus connectivity issues tend to arise here and there. While small issues can be a little bit of a bother, the system allows for input from students separated by vast distances to be collected among classmates in real time. It enables  the collaboration across thousands of kilometres, which will truly define the future of education. Moreover, it provides the students with a good introduction to the programme’s ‘Mobility Concept’. After a month of classes, all SELECT students attended the first of several joint events at the SELECT Fall Seminar at KTH in Stockholm, Sweden during the last week of September 2016. This Seminar was the first opportunity for the whole programme to meet in person.

As an attendee who traveled from UPC to KTH, I was intrigued by the outcome of the programme on top of the direct benefits of the content delivered from the presentations. UPC students traveled to KTH in three groups, arriving in Sweden at various times, travelling through various cities. Upon arrival of the last first year UPC students in Stockholm, a group of second year students travelling from TU Eindhoven happened to catch the same metro towards the hotel accommodation. Upon the arrival of this mixed group at the hotel, some second year students were already catching up with one another—being reunited for the first time this year, as they are currently spread out over several schools in many different cities—a result of the ‘Mobility Concept’. Seeing their colleagues arrive, the second year students were elated to be reunited with one another from the other locations. A very warm welcome ensued, hugs and good tidings were exchanged, and suddenly, the first year students arriving with the group caught a small glimpse of their future.

The following day saw the beginning of presentations at the seminar. Needless to say, many introductions were made, and first year UPC students were able to finally meet some of the lecturers and program administrators they had only ever seen on a monitor, or been in email correspondence with. Throughout the week, interesting information was presented to the students. The seminar’s content included activities and presentations focused on the topic of Project Management and successfully completing large projects. Second year students presented on their Integrated Projects of the Year (iPoY) in which a team of students that are located at different universities collaborate on a project of their own design. Throughout the week, as first year UPC, KTH and OUSL students met in person for the first time, many students gave responses of, “Oh, I remember you”, “I’ve seen your name before” or “It’s nice to finally meet you in person”. Having lunch, coffee and breaks with fellow classmates permitted all students to put ‘faces to the names’ of people whose voices or comments were only heard or seen during classes prior. MSc SELECT began to feel like a single class, the difference between customary classmates, is that this group has a geographical footprint among many thousands of square kilometres.

Following the conclusion of the Seminar, at a farewell dinner, an evolution could be seen. From table to table, students sat in mixed groups in the dinner hall, a few from each location sitting together. During the first dinner held together earlier in the week students were most comfortable with those from their home university and tended to flock together, however, this was no longer the case. Some UPC students were able to stay for the weekend and spend further time with their classmates, and become further acquainted with the beautiful city of Stockholm. Although I was regrettably not one of those who stayed for the weekend, it is clear that the camaraderie was great and new friendships were forged and further reinforced.

Returning to class the following week, a group presentation was given by KTH students. A student from UPC anonymously provided a verbal comment to further help the development of the KTH students’ group project. The comment elicited a reply of, “Thank you Marco for your comment.” No longer were the voices on the other end truly anonymous.

The ‘Mobility Concept’ means that InnoEnergy Master’s students will spend each of the two years of their Master’s studies at a different university, in a different country. Furthermore, it is a very important lesson that will become increasingly present in academics and professional life as the world continues on the path towards globalisation. Students learn to cope quickly in the new environments, but this concept also accomplishes the goal of remaining connected with individuals while separated by vast distances.

The connectivity issues for remote attendees to classes still arise as the system is ironed out. But in my opinion, these hurdles do not seem to be too much of an issue when one looks at the broad context of what this system can accomplish:

It provides a reminder that I am connected to my colleagues who are very much like me—we are studying the same concepts and have similar interests—although we are physically separated. And I come to understand that in my second year, this remote connection will not be present as there will be no such classes. It becomes apparent that I will be one of those second year students running to hug my fellow classmates at an event because the ‘Mobility Concept’ provides a window for students to remain connected while being just that: mobile.