The Speaker Series are informal and open talks organised by the InnoEnergy CommUnity. These feature professionals from the energy sector who want to share their innovations and experiences with a large InnoEnergy community, made up of entrepreneurs, researchers, alumni and students, and encouraging a networking environment.

Renewable energy sources are widely agreed upon as the key to a more sustainable energy future. However, their large-scale implementation in existing electrical networks represents a challenge, particularly in rural areas. This was the topic of this year's first Speaker Series of the InnoEnergy community in Barcelona. Santi Martinez and Ramon Gallart of Estabanell Energia were invited as guests to share their experience in the electrification of remote regions. Coming from an isolated community of only 9 inhabitants himself, Santi Martinez is driven by a strong motivation to improve quality of life for such rural areas. Being an expert on smart grids and an enthusiastic speaker, all prerequisites were given for an informative and instructive evening during which various aspects of rural electrification were discussed.

CEO of a large distribution system operator, Santi Martinez discovered that while smart cities are attracting much attention, rural villages are easily forgotten. Santi aims to fill this gap with his project, Smart Rural Grid, which has already successfully employed their innovative technology in a pilot location in the Pyrenees, Vallfogona de Ripollès, and starting to infiltrate Germany as well. Along with his technical engineer, Ramon Gallart, they are making strides towards the implementation of smart grids in rural areas. 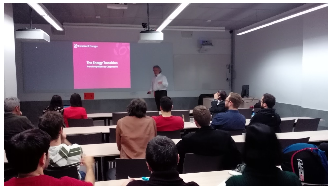 With a sustainable energy future as the superordinate goal, Mr. Martinez gave an overview on how independence from traditional energy sources can be achieved on a national level as well as in a regional context. Germany and its politically driven drop-out of nuclear energy and the United States with their transition from fuel dependency to independence using controversial fracking technology were given as examples of how countries go through energy transitions.

“No smart cities without smart rural grids”, stated Mr. Martinez and emphasized the need of rural electrification and telecommunication networks in the pursuit of these transitions. Since urban areas usually receive electricity produced in rural regions, a modern and flexible interconnection between these two is crucial. Thus, the development of smart rural grids is of particular importance. However, in order to realize the change from a rural network to a smart grid, further steps have to be taken. In this context, the creation of local energy markets allowing for a peer-to-peer energy commerce as well as the role of the distribution system operators (DSOs) to facilitate this transition are seen as crucial.

According to Santi, the incorporation of the consumer as an active part of such a system is of central interest in assuring the feasibility of a smart rural grid. Against the background of distributing electricity production, prosumers (those who produce and consume energy at the same time) play a key role and their involvement has to be supported by DSOs in order to guarantee an effective distribution and consumption of the produced electricity. This “local to local” approach relies on improved information and communication management including intelligent distribution power routers (IDPRs) and aims to reduce losses due to unbalanced loads.

With 50% of the company's electricity network operating in remote areas, Estabanell Energia holds great competence in the field of these rural electricity distribution systems which is recognized far beyond the Catalan borders. For example, Tesla, one of the most innovative players in the field of electric vehicles, approached the company in 2015 to discuss the possibility of implementing super chargers to prepare a network for future penetration of electric vehicles in Europe. In Spain, however, the framework conditions and regulations are hindering the deployment of such energy storage solutions, which also affects the development of smart rural grids. “Why is it possible, for instance, to charge a cell phone but not a large-scale battery?”, Santi inquired.

A round table discussion following Mr. Martinez’ presentation built up on this particular issue and allowed for a lively dialogue with the participants reflecting on the concept of smart rural grids. Thanks to the in-depth knowledge and technical expertise of Mr. Martinez and his colleague Mr. Gallart, the importance of intelligent rural electrical networks as a key factor of a flexible and sustainable energy system was explained.

Fighting energy poverty, providing modern energy access, assuring equity; these are big goals, but the strategies presented tonight including the implementation of intelligent rural networks along with the adaptation of energy regulations allow for an optimistic outlook. Against this background, the electrification of isolated areas worldwide might soon become reality.

The Texan That Gave up Beef