“Education beats at the heart of sustainability”

What started as a small idea in January (click here, if you haven't read the previous blog post), has now been successfully implemented;Sustainability by Education, the idea of bridging the gap between sustainability professionals and future generations in order to enhance and spread the idea and concept of sustainability. Over the past months, a group of InnoEnergy students have elaborated an interactive and interesting workshop for kids from 9 to 13 years old, which aims to do exactly this. Aside from the many best practices by institutes and NGOs available online, Julia Bayascas Caseras, Esteban Pastor Calatayud, Sebastián Zaera, David Corcoles, Natalia Escobosa Pineda, and myself, Leon Haupt have developed new approaches and methodologies to create an amazing learning experience. Coming up with the workshop itself was not the only challenge the team was facing, finding a school which was interested in the group to present and practice the workshop was a key milestone, as well. Thanks to Júlia's uncle, Colegi Jesús, Maria i Josep, a school in Barcelona was keen to collaborate with this project and give us the opportunity to test the workshop in three, two-hour classes. Thus, the first week of May 2018 the team of six CommUnity members visited this school to give three sessions of a hands-on experience on sustainability to around 70 students. 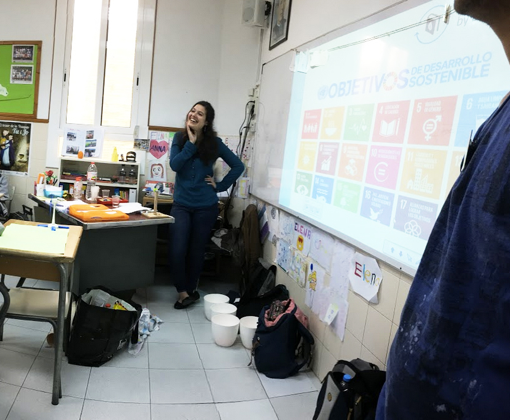 The day began with an introduction round for students and the team to get to know each other. The kids were startled by curiosity, as it is not common that six young people from different nationalities visit their school. Natalia broke the silence and opened the introduction round by saying her name, her future dream career when she was a kid and one word she associated sustainability with. The children were keen to share their name and vision, but when it came up to sustainability, most of them were hesitant to say anything. Some associated sustainability with environment, others were not able to pronounce the word, and some others defined the concept perfectly. We collected the answers and built a diagram sorting the answers in three integrated layers: environment, society and economy. With more and more answers, the idea became clearer to the students: Everything is interdependent and sustainability is what creates an equilibrium between these layers.

What is Carrying Capacity? 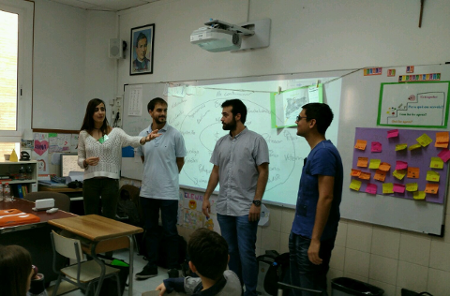 Equilibrium in the context of sustainability needs to be further explained, as it is somewhat abstract and broad. Therefore, the first activity was focused on the concept of carrying capacity. To easily visualise this phenomenon, a simple but impressive game would quickly show what it meant. In this game, David and Sebastian were representing two different earths with two different mindsets, each with one slice of bread: David, representing the fast consuming and ruthless population, who tries to get most of the bread consumed at once. Sebastian, on the other hand was more aware of a reasonable pace of consumption and tried to save it as much as possible. Shortly after starting, the ruthless earth (David) started choking and apparently started suffering from the fast consumption. Early on, it was clear that the bread illustrated the available resources on earth. Júlia asked for the observations and possible interpretations. And everyone arrived to the correct conclusion: If we have a negative impact on the environment in a too short a period of time, the earth will not be able to cope and its carrying capacity will be exceeded. We need to be more conscious about what and how we consume. Sometimes, we want things we don't need. If we continue like this we will explode the earth’s carrying capacity and decrease our overall living standards.

What is the Tragedy of the Commons? 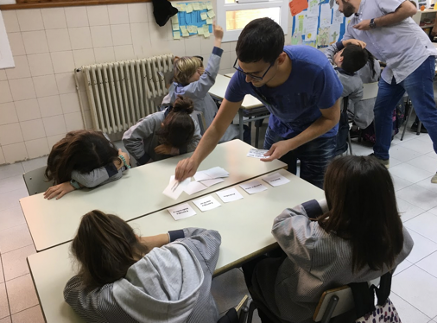 But there is more! Another concept, fundamental to sustainability was introduced: "The Tragedy of The Commons"! Again, this round started off with more questions than answers. The kids were divided into teams, who would send a pair of their members per round to win candy for the team. In the middle of the classroom, a big blanket was spread and held together by the  first teammates of each pair, then candy was placed on the tensed blanket. All the second teammates would have only ten seconds to compete for the candy. The first round ended profitable for all the teams. Each team achieved yields up to 10 candies. In the second round, the next two members had to work harder to score for their team, simply by the fact that there was less candy in the blanket. This was repeated until the last members of each team participated. From the scoreboard, the decline of yield was very significant. Sebastian and Júlia gave the kids again the opportunity to draw their own conclusions: “The game favours the first teams!” and “It’s unfair!” some said. Following this, the kids were asked what the different teams were symbolising, and why this game was round-based. It clicked! Different teams illustrated different countries or continents. The rounds were different generations. The candy represented the limited resources of the world. If everyone harvests in favour of their own profit, it may attempt against the social good. Forward-thinking and considerate harvesting can decrease discrepancy between continents and future generation. By making this connection, the kids deduced correctly that sustainability is about equity, fair access to resource for everyone and of course, sharing! Success!

What is Clean Energy?

After so many abstract concepts, energy as a key to a sustainable future was something the pupils had some knowledge. Nevertheless, as energy engineers, this topic is something we cannot often talk enough about: Sebastian introduced renewable and non-renewable resources for the means of energy production.  Esteban continued with solar PV, the immense amount of energy coming from the sun and the resulting wind on the earth, which can be harvested using gigantic wind turbines. Esteban accentuated the fascinating world of renewable energy with a small homemade wind turbine fueling an LED, when powered by a blow dryer. This got the kids attention. Some were skeptical and assumed that a battery would be powering the LED, but Esteban explained that the energy solely comes from the small electric engines which act similarly to the dynamo of a bike. 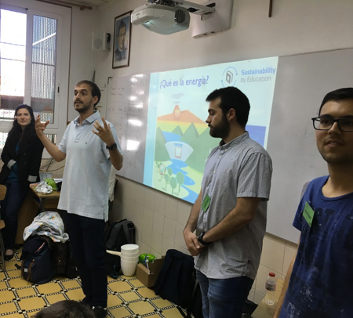 David had the challenge to talk about nuclear energy and its advantages and disadvantages. Júlia then explained what it meant to harvest biomass and why non-renewable energy sources are still used nowadays. Eventually, David concluded that energy efficiency is one of the most powerful tools we have as consumer. After the heavy explanation about energy resources, another game helped the kids process the new information Each table had to allocate different statements to the respective energy source. Each table was supervised by one of the  CommUnity members to ensure that the learning outcome had been achieved.

Why does renewable energy make a difference?

What does it mean to act in a sustainable way in the context of renewable energy? Once again, the kids had to split up in teams for a game that sums up the workshop.  White and orange coloured ping pong balls were handed out to each of them.The orange ones represented the renewable energy resources, while the white ones were conventional gas, oil and coal for conventional energy plants. Each team had the same number of balls but a different proportion of renewables, to the point that some teams had no renewables at all. The game was played in rounds. Every round, the students were asked to consume two units of energy and they could choose the resource they used. After the kids handed us the resources they chose, we returned the orange, renewable ping pong balls to the basket, so they could be used in the following turn as well. The first round caused slight confusion. Apparently, the kids did not expect getting the renewable energy back. After the final round, the total amount of remaining energy that each team had was counted. This symbolized the energy that they would have had for the next generation. The aim of the activity was to show that renewables are an endless resource, therefore consuming it does not diminish your pool of resources.. However, if you rely on non-renewable sources there is less options for the following generations to satisfy their energy needs. This activity successfully challenged and braced the understanding of forward thinking in the context of renewable energy. 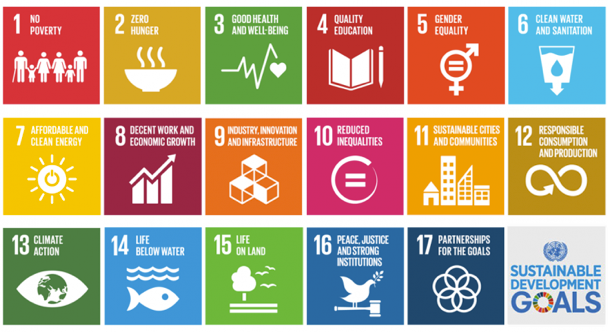 Kids were noticeably worn out and the attention dipped, but in a last attempt we concluded the workshop rounding up by showing the Sustainable Development Goals. Clean energy is just one goal among others, such as: zero hunger, clean water and sanitation, no poverty, and quality education education, with 17 in total. The most important to take away is, that every person in every position can contribute to sustainable development.

The interaction with the kids was amazing and incredibly inspiring! It motivated us to follow up on this and to expand it to something bigger. We are currently working on the feedback we got from the kids and teachers. Moreover, new activities explaining new concepts are being worked on. The translation of the workshop material will be something to focus on, as well. The material was created in English and has been translated to Spanish already, but more languages will follow. In terms of dissemination, the material, including instructions will be uploaded soon.

Thank you to everyone who has been involved so far!